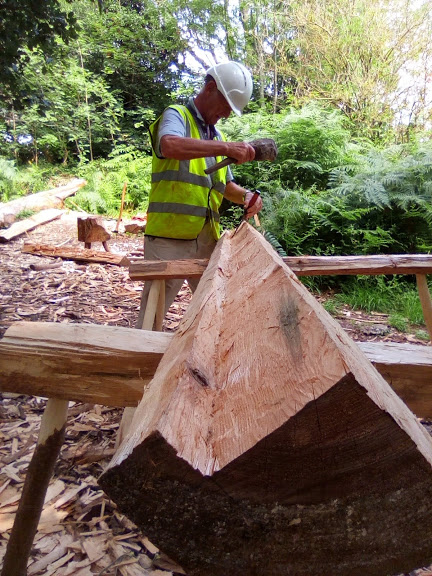 This week will be our last official week before the summer break.  Our focus remains on the thatching task and the construction of furniture for the building interior. 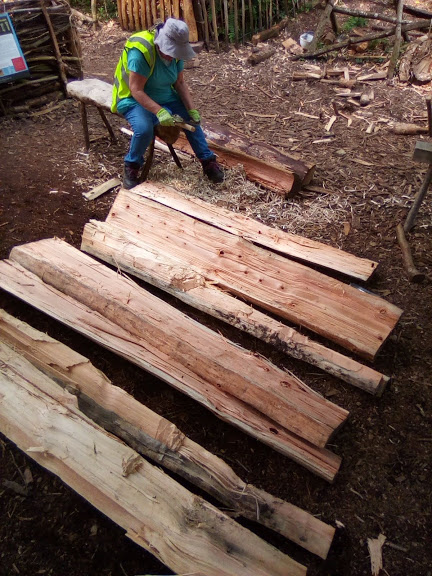 The first task this week is to “solve” the issue of the thatch overlying the projecting purlins of the roof structure.  From the very beginning of this project (18 months before we started building!) the impact of the structure on our ability to thatch it was of concern.  The issue stems from the transition of roughly circular walls (constrained by the posthole evidence from House 6) to a definitely tetrahedron roof apex (in this case constrained by the model making solutions to the internal post hole evidence – and my structural solutions to those patterns).  I have stated many times during this project, that the look of this building is based on my interpretations of the evidence. Different builders may have found solutions that I did not, but, given by extensive trial and error model phase, the triangular purlins just below the roof apex presented a sound and interesting solution to the available posthole evidence.  The question was always “how do we transition a conical roof base to a pyramidal roof top without creating weaknesses or issues in the thatch roof covering. More specifically, how do we overcome the slightly projecting purlin ends without creating holes in our thatch?

The first part of this process was to cunningly avoid the formation of corners at these points by carefully positioning the rafters either side of the purlin ends.  We also chose specific rafters with bends – or knuckles, to change the angle of the roof pitch ant these points – and to maintain the overall roof line. Remember, 25 rafters had to meet at the top of the roof – despite their roof angles ranging from 45 degrees to over 50 degrees in places (not an easy task).  The result is a roof frame that has a circular circumference, that blends into three discrete flat sides with rounded corners, and finishes at a regular tetrahedron top. In terms of thatching, the issues all centre on the angle of thatch running past these projecting purlins. Reed is not a very flexible material and will break if over stressed.  The temptation to run over the purlin ends with the thatch had the potential to create issues of broken thatch and leaks. The rafters above the purlin corners changed angles through their natural shapes to reach the imaginary centre of the roof apex. So what we needed was to change the angle of the thatched roof at these three discrete points – to allow the thatch to run smoothly beyond them and so avoid broken or disrupted thatch. 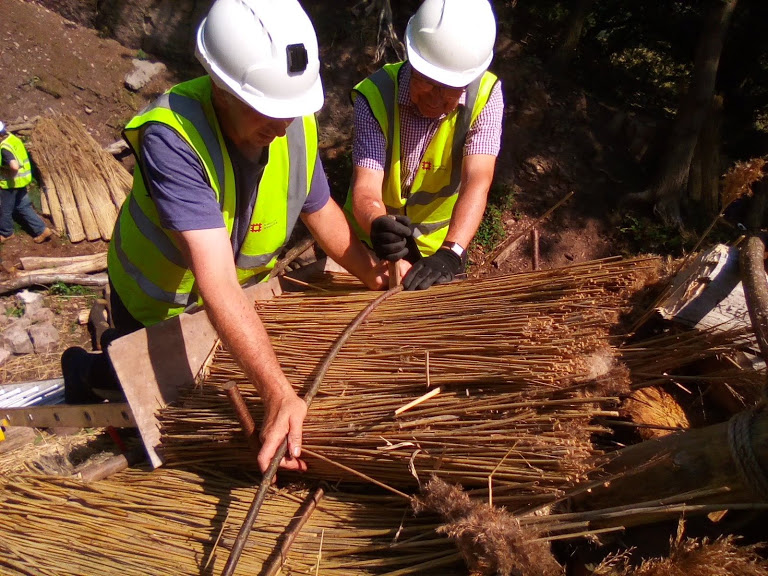 This was achieved (after debate and agreement) by the creation of three thatch blocks (one at each projecting purlin corner) that would adjust the angle of the thatch at those points, thus allowing the next ring of thatch to run beyond the purlins without mishap. 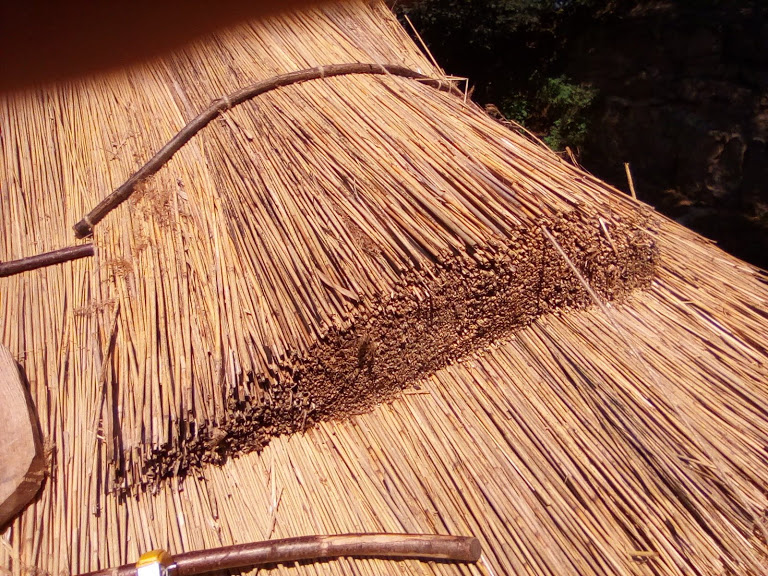 This was done by building up thatch bundles and locking them in position with a short sway.  The thatch was cut short to prevent it riding up and over the purlins. 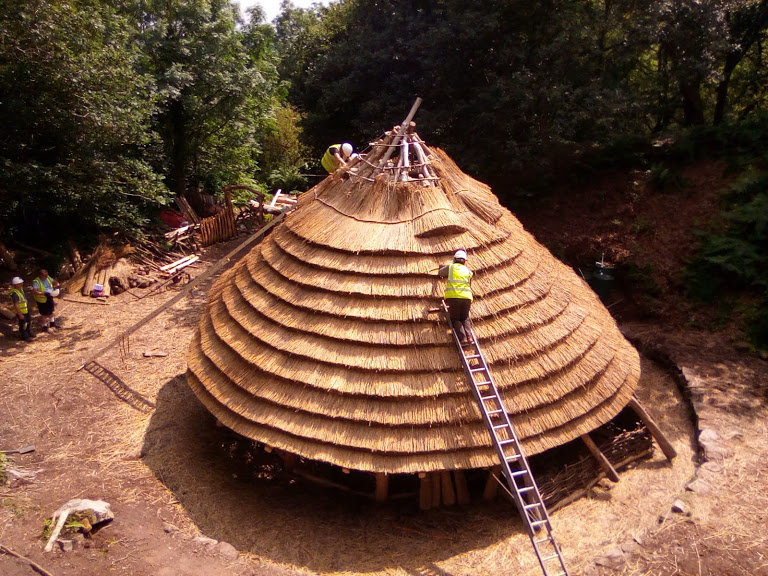 Once in position, these three “bolsters” were then covered with the next layer of thatch – allowing the reed to adjust to the angle of the roof as it changed from the flatter areas to the purlin corners. 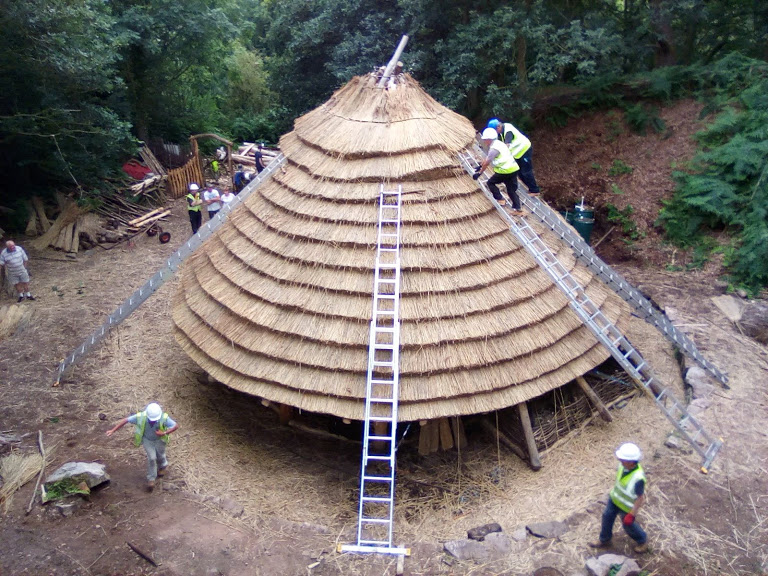 Furniture production is in full swing this week.  A team is concentrating on splitting and shaping planks for the first interpretation of a bed. 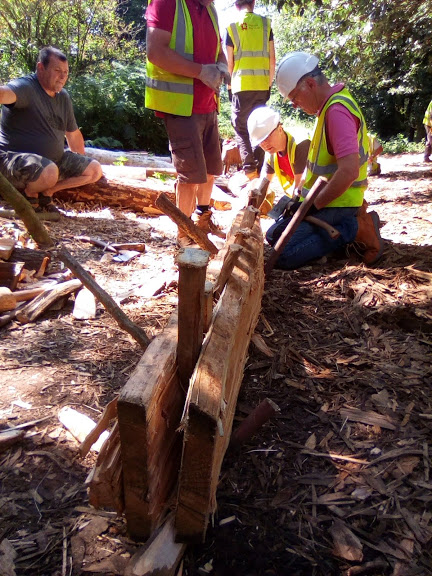 Edwin has produced two trestles using appropriate techniques to aid the manufacture of the door frames and doors.  It is this aspect of projects like this that interest me.  Edwin saw a need to make the carpentry tasks more efficient, and using suitable techniques and materials, produced the equipment to enable it.  There is of course, no direct evidence of timber working trestles from the Bronze Age in the UK, but, given the complexity of carpentry from elsewhere in the Bronze Age world, I have no doubt they existed.  Edwin saw a need, and used the tools he had at hand to produce them, and in line with currently available carpentry evidence- a valid interpretation of the past in my opinion.

The top portion of the roof is definitely reflecting the triangular structure beneath and the roof is taking on a unique appearance that reflects the complexity of the ground evidence.

Some of the finishing touches of the building have begun.  Window frames hewn from ash and fitted into the exiting woven hazel walls. 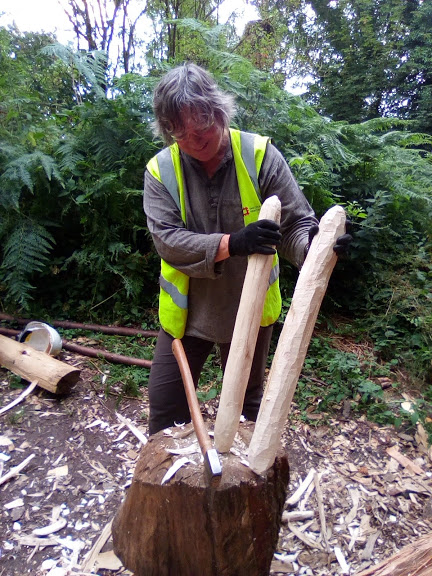 Carefully hewn door jambs for the main doors have been jointed into the wall plate and threshold. 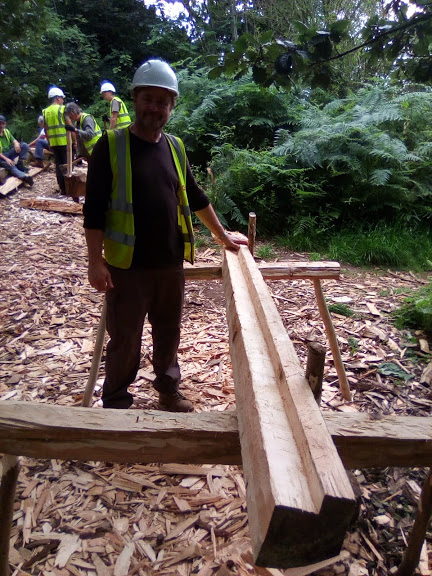 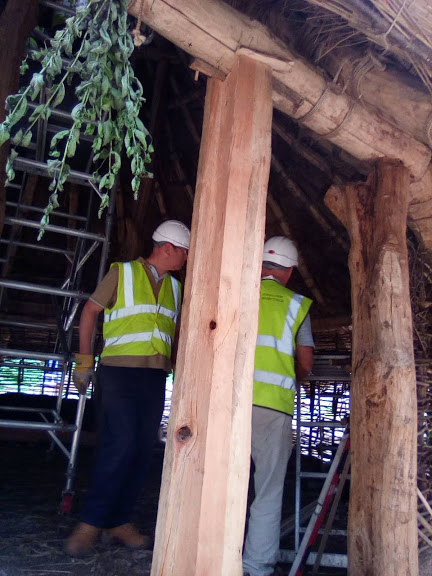 The final projecting rafter has also been removed to allow the thatch to ride over the apex of the roof. 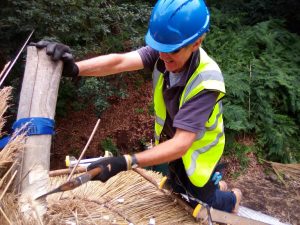 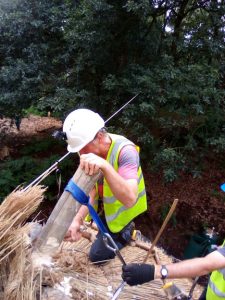 And beautiful planks are being split and hewn in preparation for bed frames and furniture. 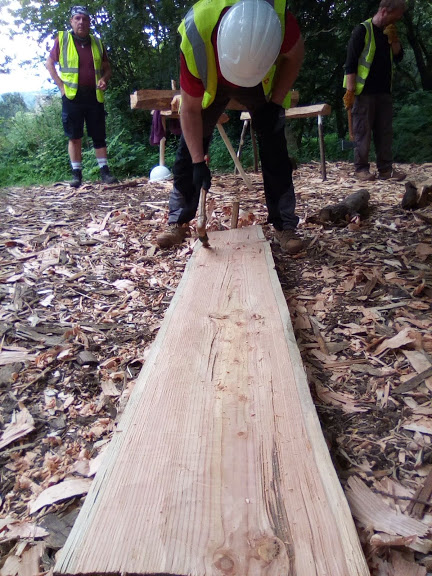 Over the last few weeks we have watched the interior of the building becoming gloomier and gloomier as the hole diminished.  Now the roof is closed and we await the next visit to complete the thatch cap and make it truly weatherproof. 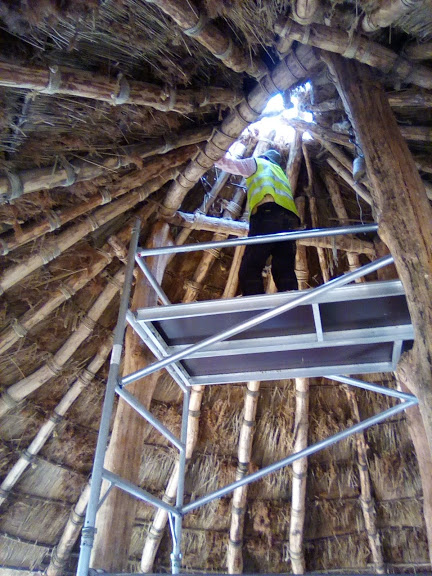 After a huge effort, the roof is nearly complete.  Its beauty is remarkable, and to those who know what they’re looking for, subtly reflects the unique structural solutions we have had to employ to make sense of the archaeological evidence. 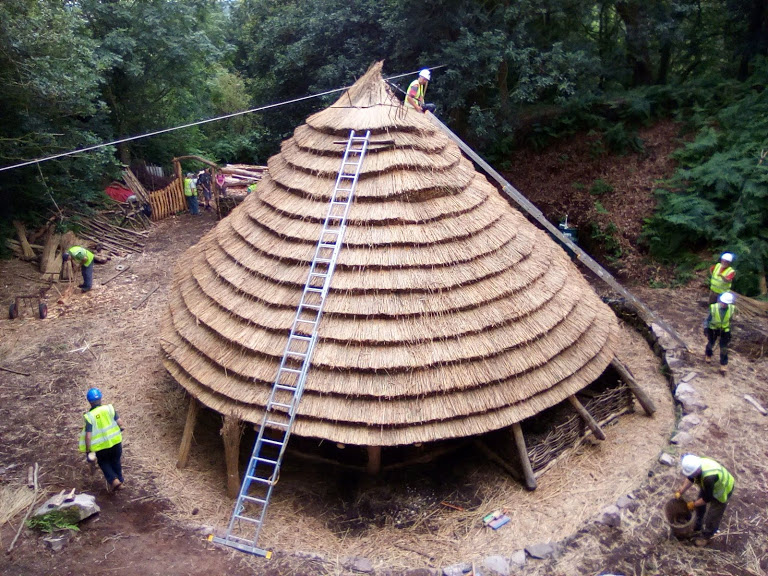