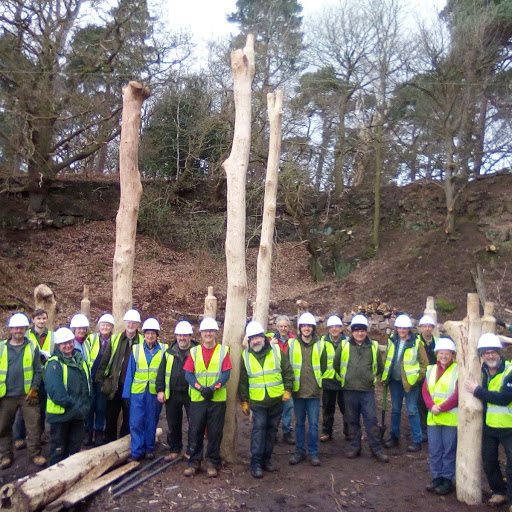 Our false spring last visit has given way to far more seasonable weather this week.  High winds and heavy rain are forecast for the middle of the week. 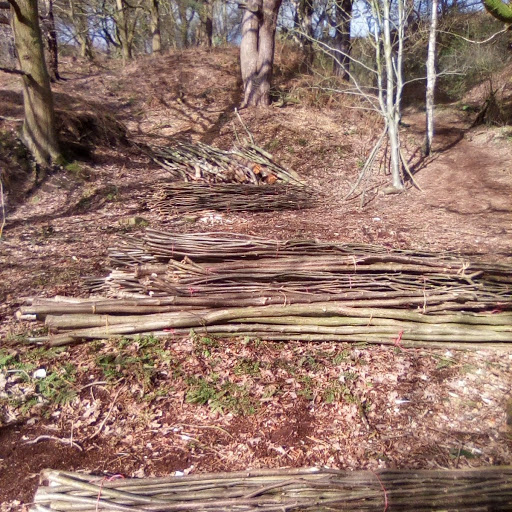 Our aim (weather allowing!) is to put in as many of the structural posts as we can – starting with the three tall central ones.  As always when lifting heavy things vertically, we need to take things steady, with safety being paramount on site. 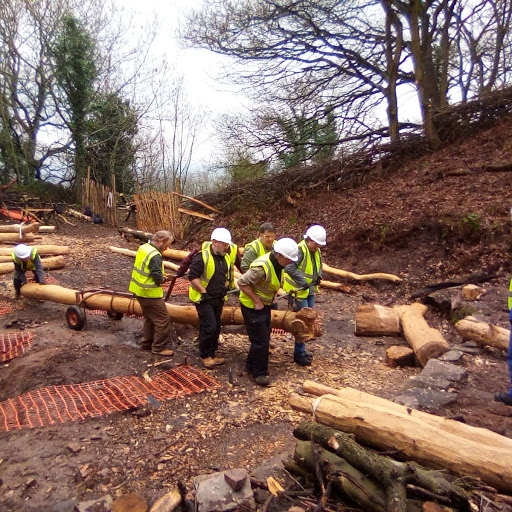 Monday saw the team prepare the site.  Holes were widened, small “A” frames were constructed to support the posts at the correct angle on their prepared ramps, and the directions of pull were finally chosen and rigged to enable the most efficient raising possible.  A Large “A” frame was also constructed to provide a better pulling angle to each post. The issues with raising 6 metre timbers vertically focus around the acute angle of pull from the pulling team to the top end of the post. The more acute this angle is, the more effort is required to make the post move.  To alleviate this, we have ramped the post holes in order to take the lying posts from a horizontal position to around 10 degrees off the ground. The second step is to increase the angle of pull further (to around 45 degrees) by running the pulling rope from the post top – through the apex of a large “A” frame and then down to the pulling teams.  This should (theoretically) make the pull as efficient as possible. However, this operation is not only theoretical. It requires many things to come together in one glorious moment, including volunteer strength, weather and ground conditions, and some would believe a nod from the Gods! 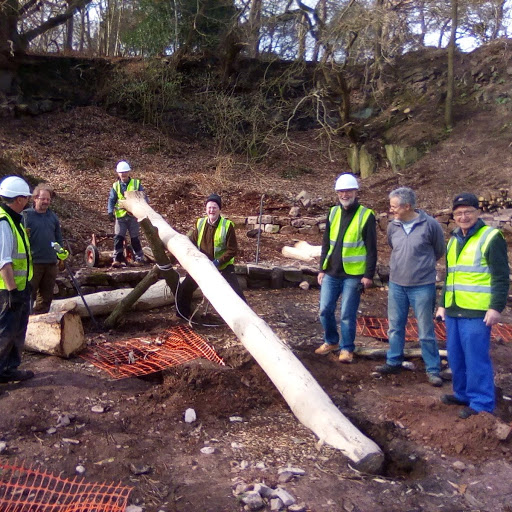 Tuesday saw the gathering of around 30 volunteers to assist with the raising of the three central posts.  By far the most complex stage of construction, these three post (previously jointed with tenon pegs and mortises) needed to be positioned in their prepared holes at exactly the right angles to make their joints work. 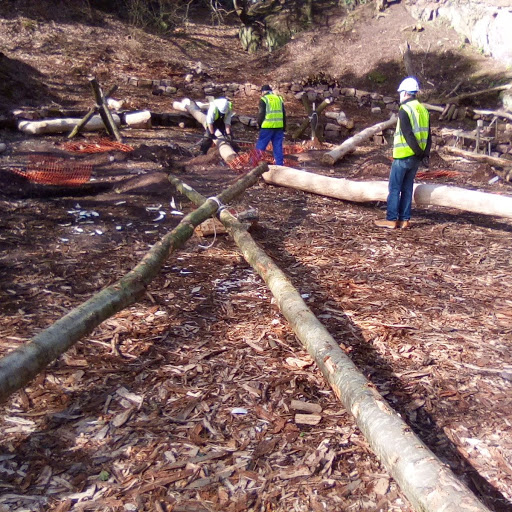 Our first lift failed due to several factors.  The sides of the prepared post hole were too soft to hold the post upright without continued support, the movement of the post from its central axis of lift as it came up to vertical, and the weight of the ash pole “A” frame, once it was past vertical, was enough to drag the post out of its footing.

We put the failed post to one side and thought again.  This time with a main pulling team (pulling the white rope – through the “A” frame and to the post top), two lateral teams (pulling blue ropes from each side of the post to keep it in line with its main axis), and a backstop team – holding a red rope (to stop the post moving too far forward under the load of the main “A” frame.

This time, with small movements and continual checking and adjustment, the post inched its way to a vertical position where it was held by the 4 teams while soil was tamped in around its base in thing, well compacted layers. 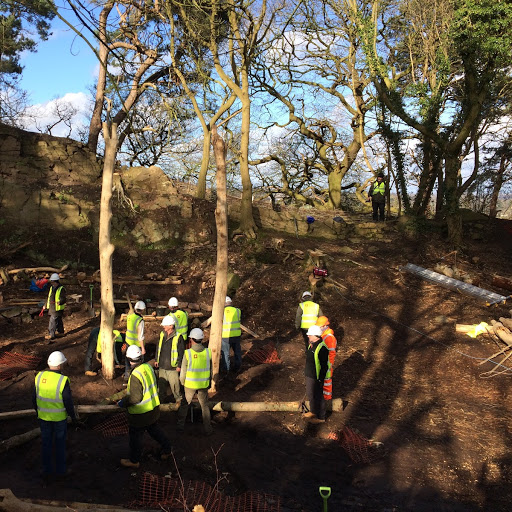 The process was repeated perfectly for the remaining two posts, and as the thin crescent moon appeared overhead at 4.30pm, all three posts stood magnificently at the centre of the building footprint. 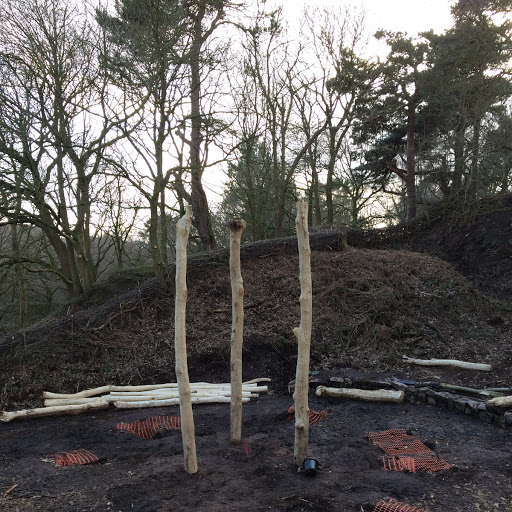 What a team! – great effort, patience and ideas to make the task work. 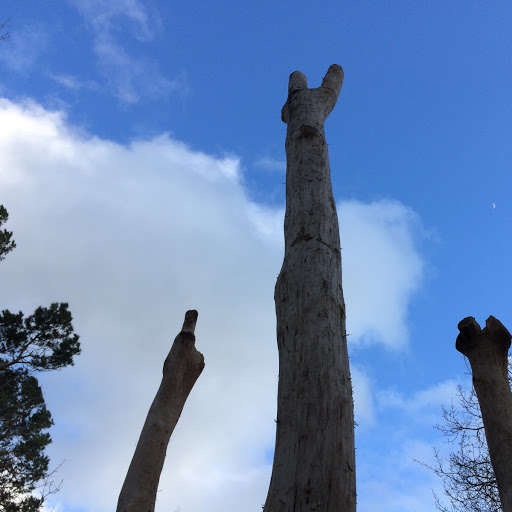 Wednesday and Thursday saw the forecast arrival of storms across the UK and high winds at Beeston Castle, so, as expected, the site was closed to construction.

Friday saw the team pressing on with the placing of wall posts in their prepared holes.  Compared to the tall central posts, this proved to be less of a challenge, although care and patience was required to lift properly and tamp the soil around their bases firmly.

While this was happening, I was assessing the overall shape of the building, and the pitch of its potential roof at various points.  From the outset, this project and its evidence has raised difficult questions in terms of reconstruction. 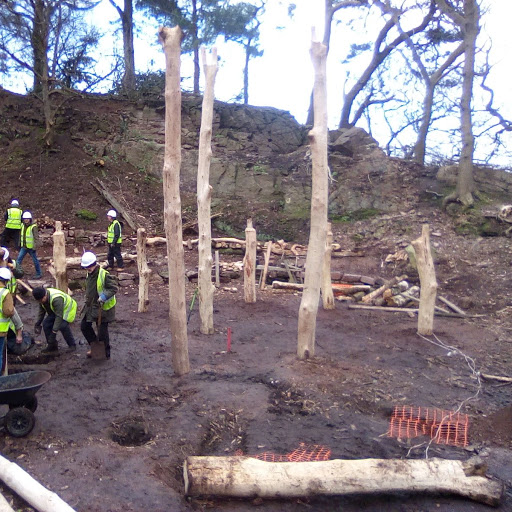 The apparently sporadic spacing of wall posts in a rough circular arrangement, combined with what appears to be a triangular central post arrangement, has always raised issues of creating some kind of uniform roof pitch.  During the drawing and model building stage of the concept, I solved these issues in various ways, but (as is always the case), the difference between a model and the real timbers is always a further step along the chain of complexity that results in a building that works. My job next week will be to work out how to solve some of the full scale issues that are becoming visible to us on the ground.

Despite the two day weather setback, we have had another great week.