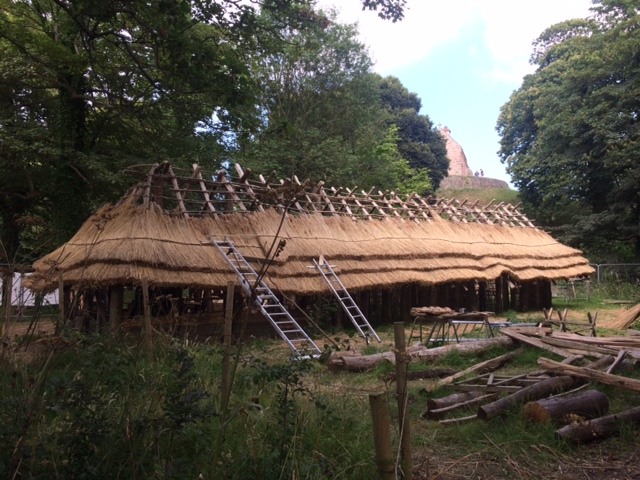 Wow! Summer is definitely here and the sun is baking the volunteers on site.  Apart from thatching, which necessarily has to be exposed to the worst of it, other jobs have retreated to the shade of the trees. 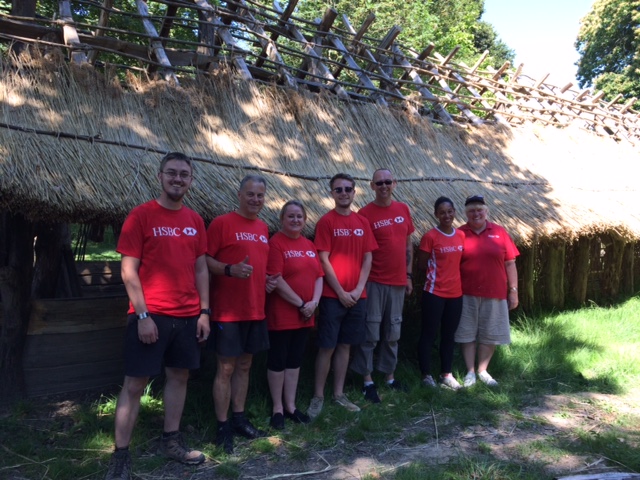 Today sees help on the project from HSBC, who have sent us ten of their best to help out.  The mission today is to move some of the thousand bundles of thatch that were delivered two weeks ago.  We are separating them into short, medium and long bundles and piling them on either side of the roof to enable faster thatching.

Two thatching teams are continuing work on the roof – we have a large amount of work each week to get the roof in place before the worst of the winter weather rears its ugly head! 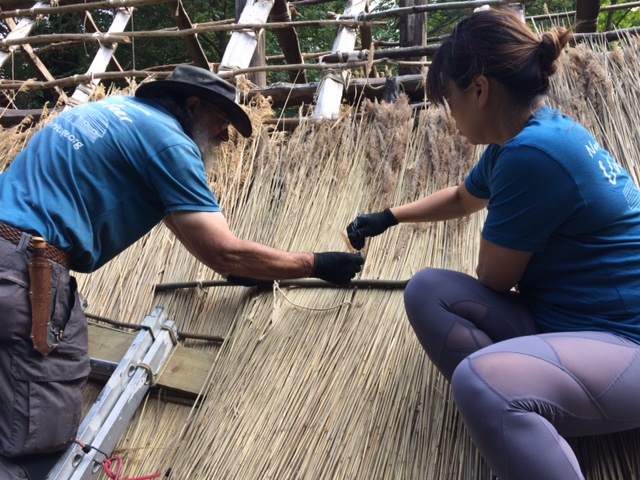 We have teams working on peg making, preparing internal timbers for the building, and finishing the last few sections of woven walls before our next visit (which will focus on daubing).

We also have schools on site today – looking at the Neolithic Longhouse and exploring the methods behind its construction.

The ambitious timetable for thatching is to complete two layers per week.  Ironically, this super warm weather will affect this goal as the roof is a pretty hostile and energy sapping environment in full sunshine.

A grey start to the day has given way to glorious sunshine again.  The very busy site of yesterday has returned to the familiar murmur of voices and the tap tap tap of chisels on wood.

Today we are focusing on thatching once again.  Two teams are working methodically along each side of the roof.  Working on the second layer of thatch is proving to be far trickier than the first.  This is due mainly to the difficulty in positioning ladders in ways that do not hinder access to the thatch and sways.  Volunteers are being careful to stick to the correct thatch thickness (6 bundles per square metre) in order to create a roof that will allow smoke to escape. 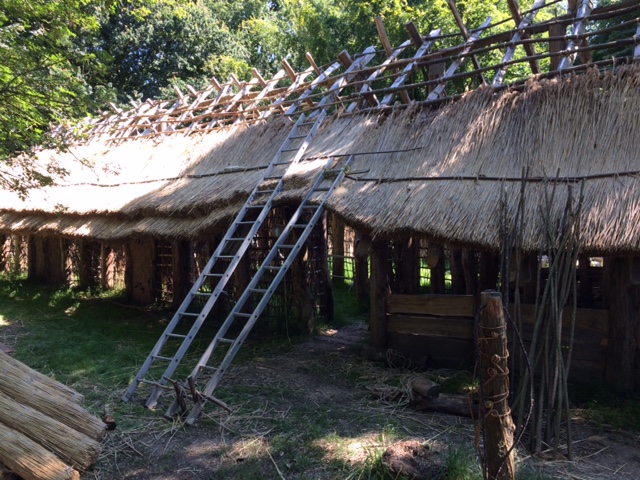 We have created new devices to help the thatching process.  Needles have been produced from thinly split chestnut – with long eyes created by boring two holes a few centimetres apart and then cutting out the groove between them to make a slot. 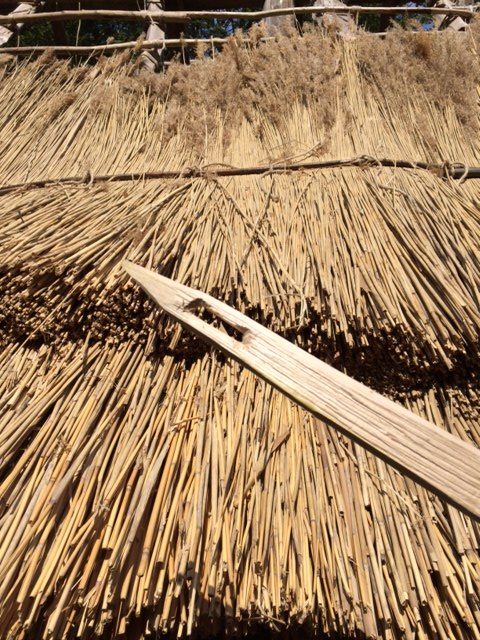 They are proving to be efficient and certainly possible to make with simple flint tools. The second device supports the thatch while it is being positioned. This plank with a pole attached hasn’t yet got a name – but it is enabling the thatchers to think about one less thing during the complicated process. 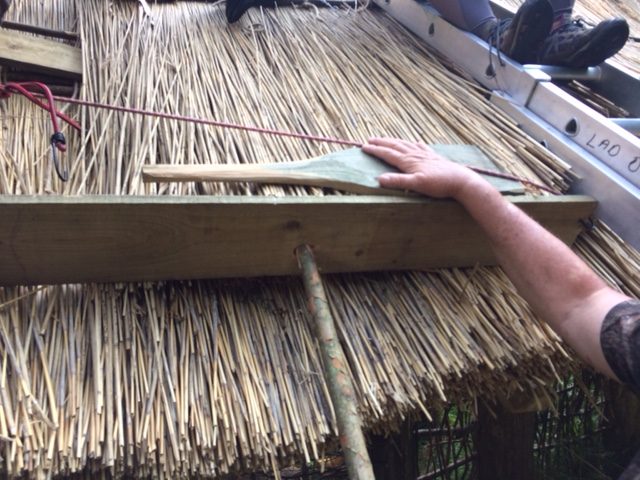 Franco, Rosie  and Daryl are working on the  window frames that will be slotted into place.  Edward has begun the second shutter – based on Derek’s first version, which has set the bar extremely high for those following! 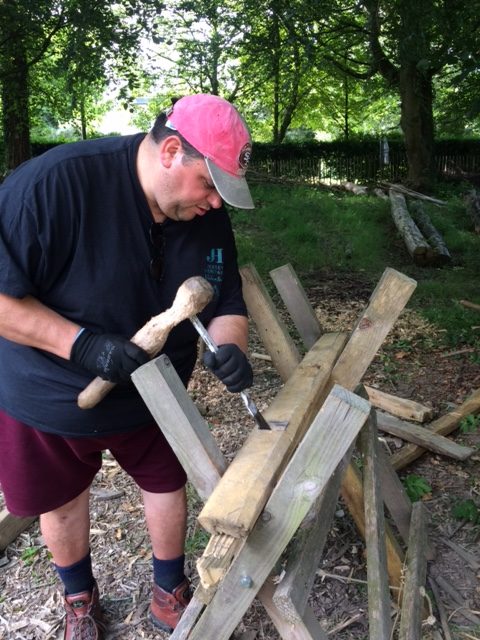 Another incredible day of sun at La Hougue Bie!

Our thatching teams are now well into their groove and they are really starting to refine the basic process of thatching into a skill.  The subtleties of thatch thickness, lashing position, dressing and sway thickness are being mastered and the roof is starting to look amazing. 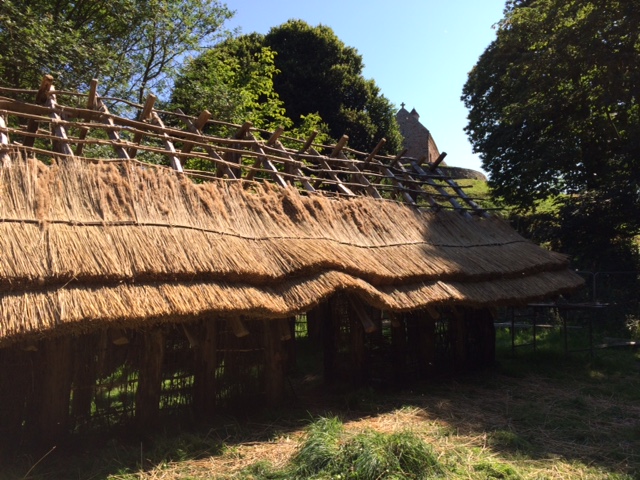 Layer three has started and our ambitious timetable of two layers per week seems to be possible! 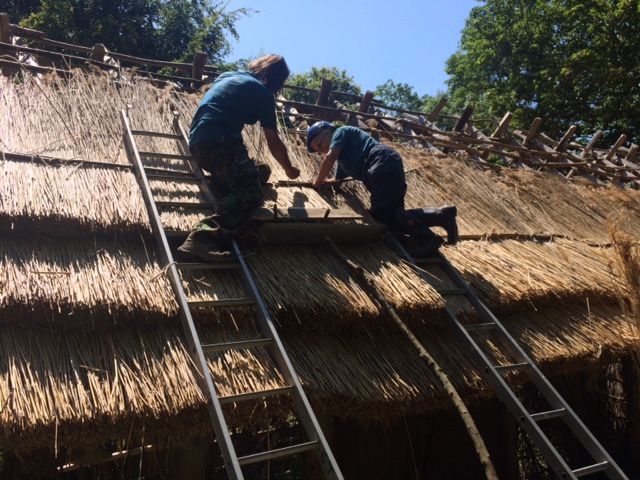 At the gable end, we have put in some temporary barge sticks (a barge board usually faces the end of a roof and contains the roofing material and stops the wind and weather from driving in beneath).  Our barge sticks are lashed to the frame beneath and provide a working edge to the roof. Time will tell if these become permanent features or not. Layer three is now covering the roof to above the purlin height and marks a third of the roof covered. 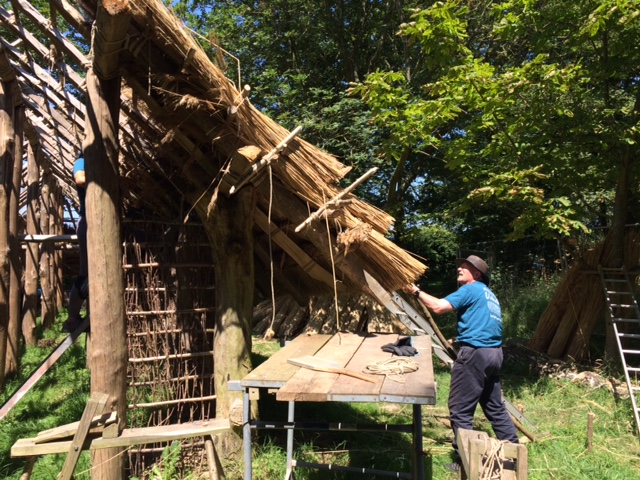 Two window frame are now built and we begin the task of fitting them between pairs of wall posts.  Again, we are exploring different ways of doing this. One method is to “simply” cut notches in the posts to house the ends of the frame sill and lintel – allowing (at least theoretically) the frame to be inserted into the space as a unit.  Another way is to cut mortises into the posts at one end of the sill and lintel and to then push in the other side into locating notches. 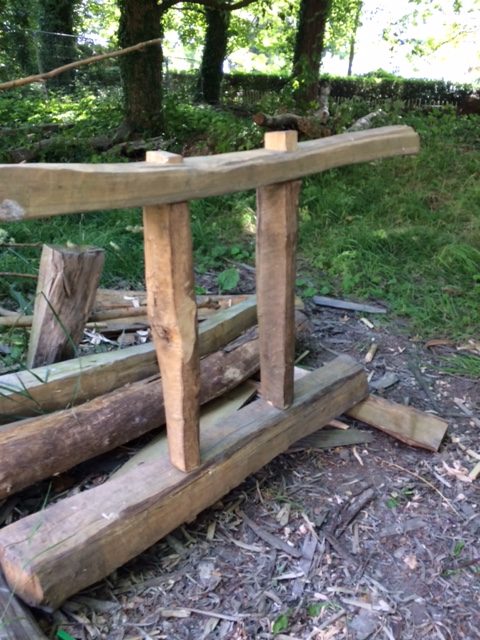 Another astounding day of warm sunshine and clear skies today!

Both thatching teams are working on the third layer – moving from the gable end of the house towards the livestock end of the building.  The slightly more complicated method of working from ladders is well embedded now, with each team finding their own particular rhythm and routine for thatching.  It should be said that working with a regular team greatly improves efficiency. In line with all of the other tasks on this build, by the time the roof is finished, the thatching teams will have learned a method and refined it to a degree where they could thatch the same roof again in two thirds of the time! 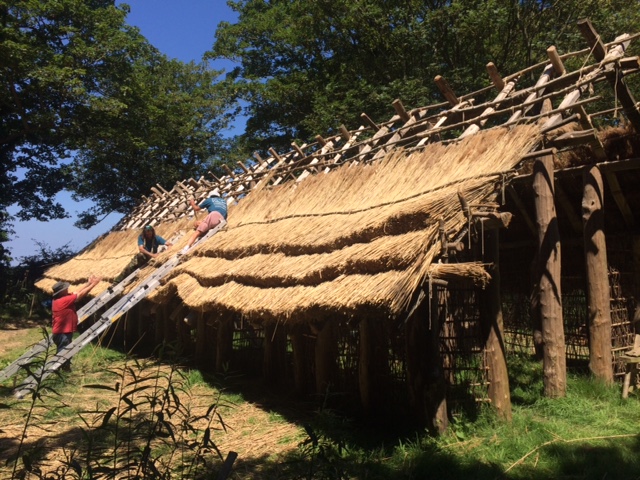 The biggest issue we face this week is the heat!  Regular breaks are being taken to ensure we are drinking enough and finding shade. 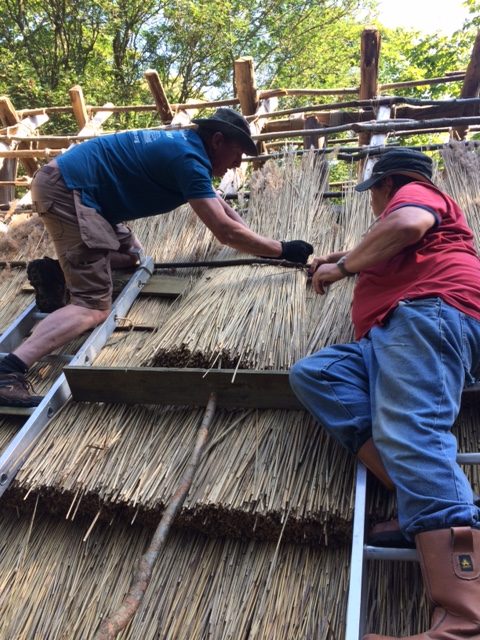 A hazy start heralds the last work day of the week.  The sun is due to shine again at lunchtime, so we have a few precious hours of coolness before the summer continues.

Thatching is the obvious priority again today with a obvious target of trying to finish layer three. 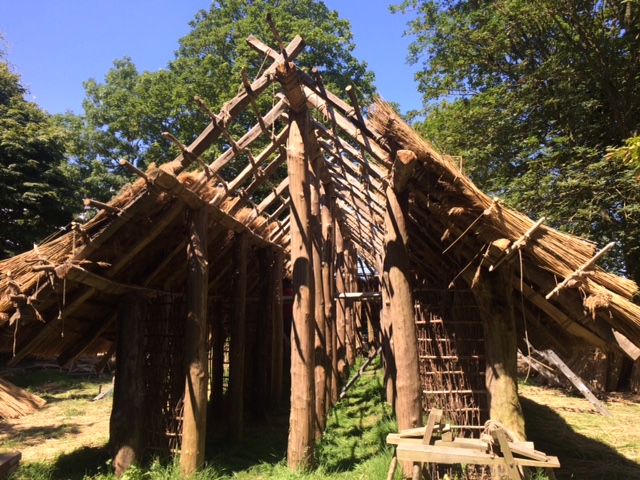 We are also looking at tidying the site in preparation for possible public involvement during our next visit. 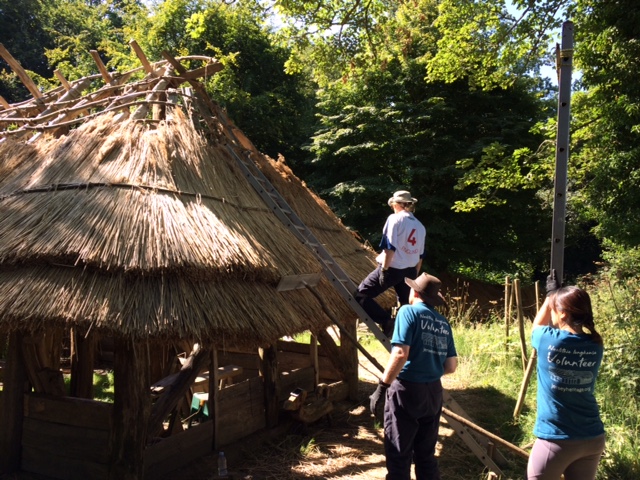 Ideas are beginning to come in from our volunteers regarding the shutters that are/will be built.  It is interesting to see how the original evidence (in this case, a three plank door from Zurich) fuels a range of other options.  Derek and Edward are making shutters that reflect the Zurich door by having hinge pegs integral to the first plank of the shutter – this enables the shutter to open like a door.  Alternative suggestions have been made however, using the same principles, one of which sees the hinge peg in the centre plank of the shutter, thus enabling the shutter to pivot at its centre – allowing light and air to enter the building without requiring much opening space into the building. 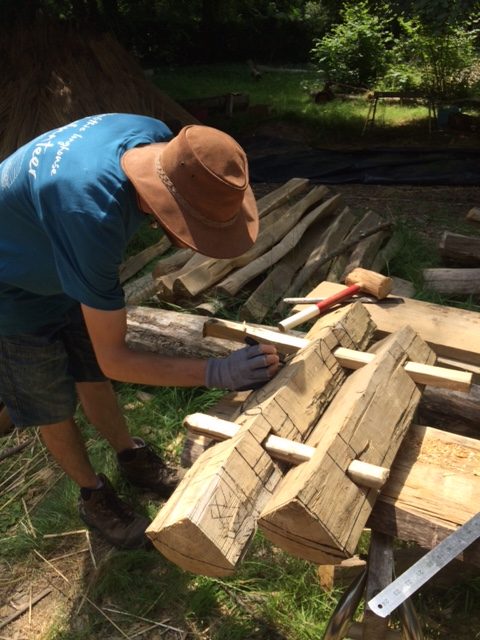 This has been the most incredible week of fine weather and the building has moved on again.