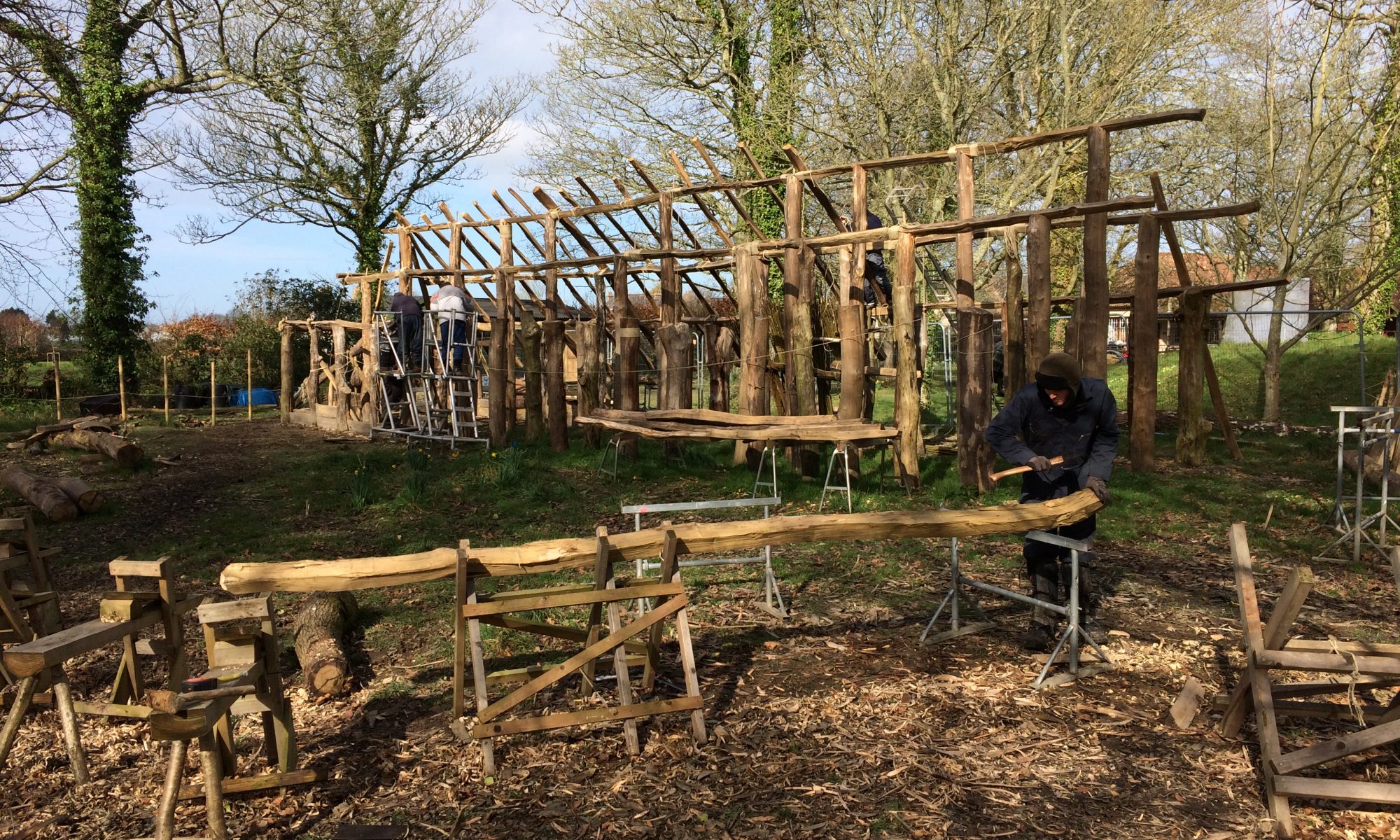 A fog bound morning marked the start of the second volunteer week in February.  Volunteers are working on the remaining “V” joints to install the Wall Plate on the southern side of the building. 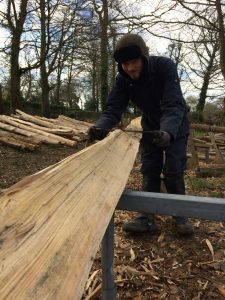 Shorter sections of quarter split timber are being used to form this wall plate and it presents an interesting challenge for those involved.  Mike, Bill, Danny and Derek are combining their efforts on this task.  They are selecting specific timber shapes to suit the upright posts and then cutting the joints to house them.  Their skills and judgement are now more than capable of performing this task! 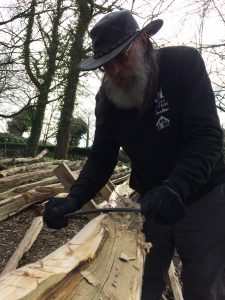 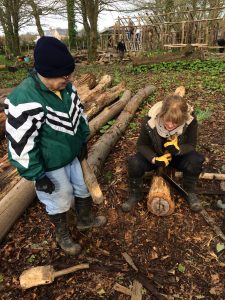 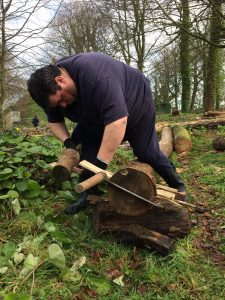 Astra has used the bone chisel to finish “Bone Corner” – a section of wall planks that have been shaped and fitted authentically.  Again, this demonstrates what is possible with Neolithic tools and provides a guide for our use of metal tools to follow (at a faster rate!). 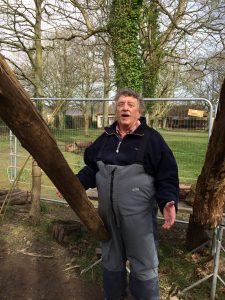 Phil is organising and fitting the central bay rafters.  We have enough rafters to narrow their gap to around 700mm.  This will not only make a stronger roof frame, but make a visual and aesthetic difference to the inside of the main living space.  We rarely think about visual and aesthetic considerations within the same building.  It is an interesting idea to consider. 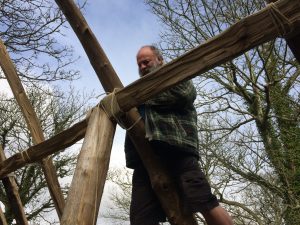 If these longhouses were indeed divided into living, storage, animal “zones”, is it not reasonable to consider that each zone may have been treated differently in terms of refinement and finishing.  A Medieval farmhouse is quite different to a medieval barn or cattle byre – perhaps not in construction technique – but certainly in some of the material choices and aesthetic/non functional considerations such as colour, and levels of timber finishing.  Perhaps to move through the length of a Neolithic longhouse was to encounter obviously different zones, treated quite differently from the next to highlight the importance or significance of those areas to daily life or belief systems? 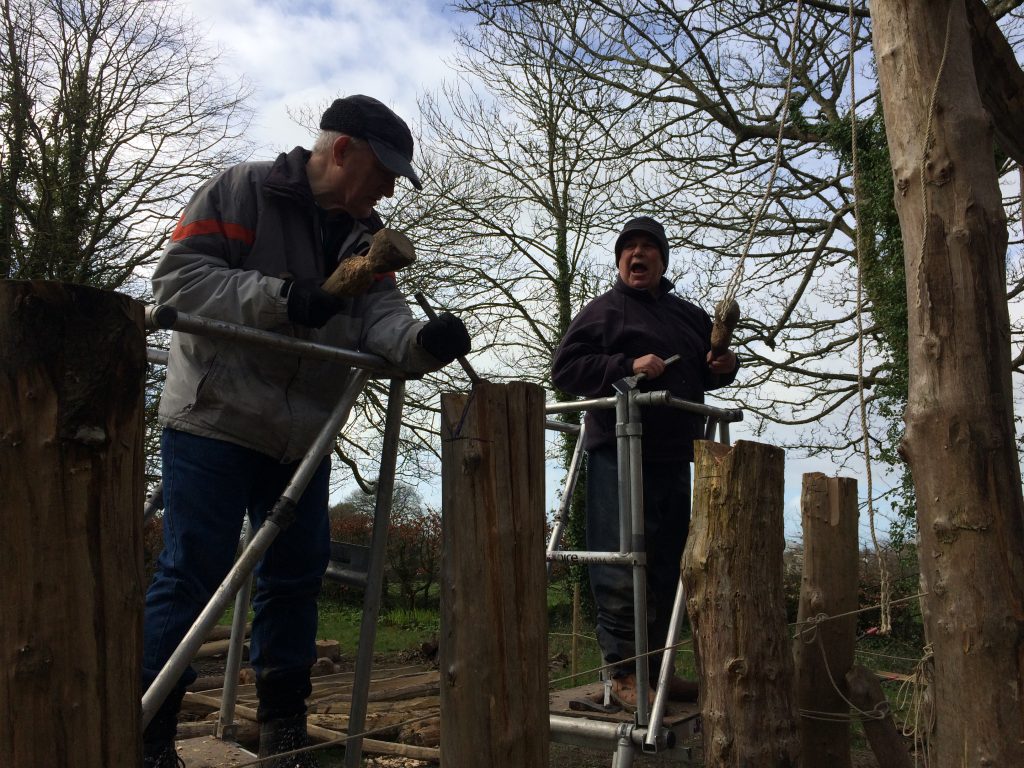 Grey cloud and a light wind are with us today – but the temperature isn’t as cold as it has been.

The decision has been made to insert two more rafter pairs into the “livestock” end of the building.  This will close the gap between rafters to 700mm and match the rafter spacing over the living space. 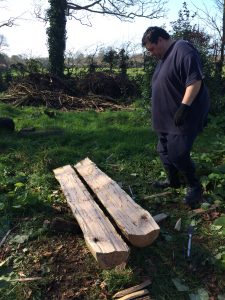 Work has begun on cutting and splitting joists to support the floor above the animal pen area.  These are being cut at 2 metre lengths and will be ¼ or ⅛ split depending on the diameter of the tree trunk.  The joists will be supported by timbers that run across the building from wall plate to wall plate.  We are positioning these timbers to come into contact with the sets of three posts that run down the centre of the structure.  Although the posts are not perfectly aligned to accommodate a straight timber, we think we can hand pick timbers that will match the curves and irregularities of the uprights.  Structurally this makes sense and will add a great deal of lateral strength to the frame. 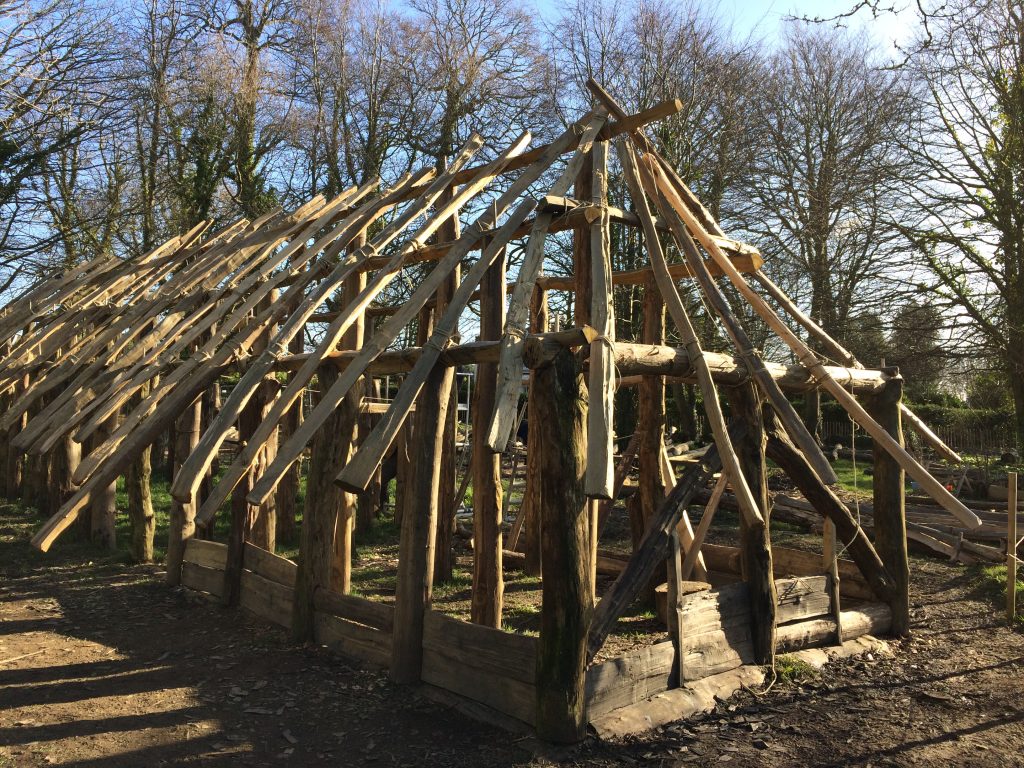 It has been suggested by some that “tie beams” were not a part of Neolithic architecture….. My personal view is that there simply isn’t enough evidence for the superstructures of Neolithic buildings to make that claim.  However, looking at other available evidence, if Neolithic doors exhibit the equivalent of tie beams to give lateral strength to three butted planks, the same principle can be used in a building.  The Neolithic door found in Zurich, uses the same construction methodology found later in the the Dover Boat whereby butting planks are held together using a perpendicular beam that runs through mortised hewn “bosses”.  This principle effectively joins and stabilises the planks and requires a high standard of carpentry to accomplish.  Are we seriously suggesting that the thought processes that achieved these remarkable products were incapable of running a timber from one wall to another and lashing or pegging it to the three posts is would encounter on the way? 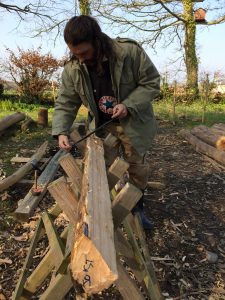 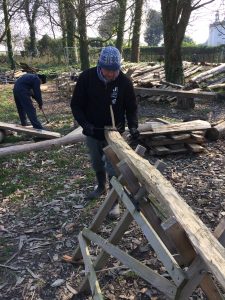 A clear, bright and chilly day has dawned at La Hougue Bie. 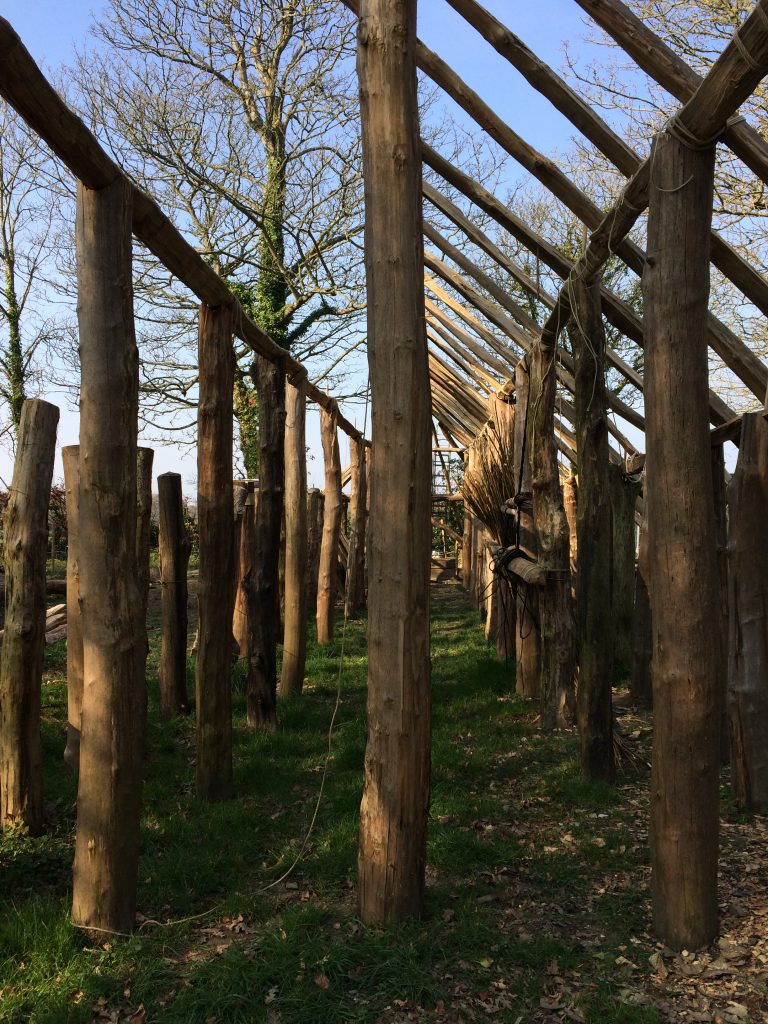 Work continues today on preparing the “tie beams” that will support the joists for the mezzanine floor above the livestock end of the building.  An oak timber has been beautifully split by Pippa, Astra and Rosie and now needs adzing to remove the sapwood.  Oak sapwood is very soft and quickly rots and encourages beetle infestation.  Unfortunately, this is a time consuming process – but necessary.  Even as we are adzing through it, we can see the worn/beetle tracks already leading into the timber. 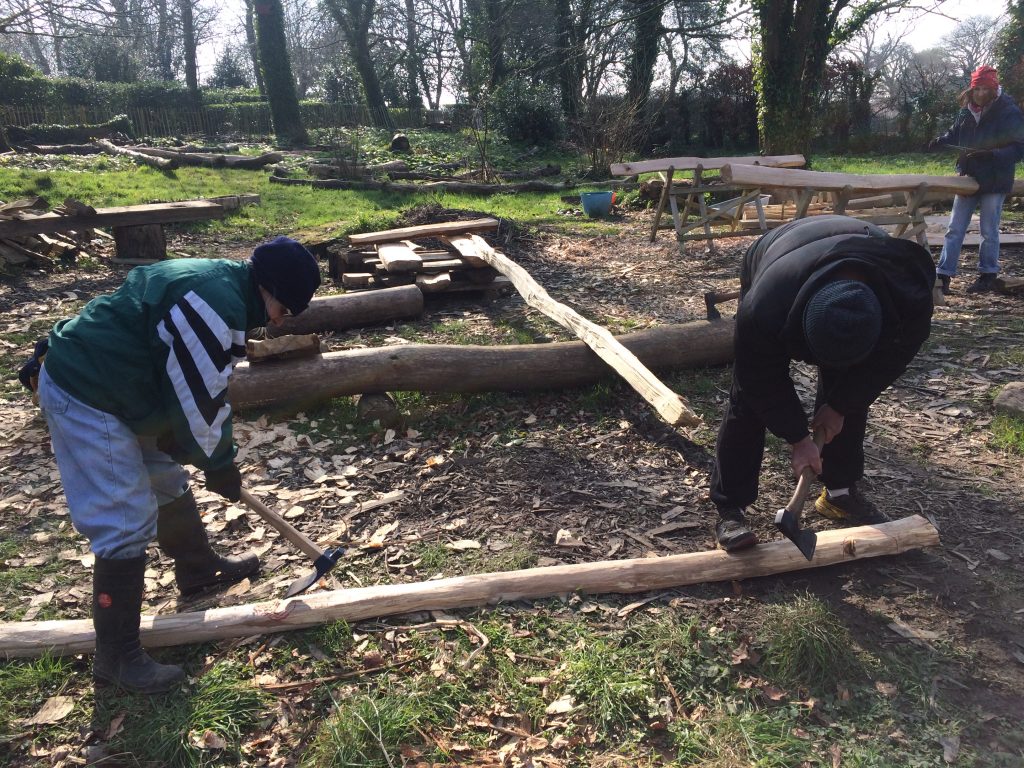 Franco’s wonderfully split joists from yesterday are being shaped by Daryl and Mike.  These joists will be support the mezzanine floor above the livestock pens and so will be visible to visitors.  Again, we face the issue of how finished or refined these timbers would have been in this portion of the building.  Was it normal to finish all timbers to a certain standard? 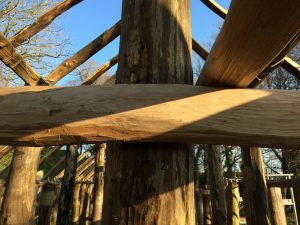 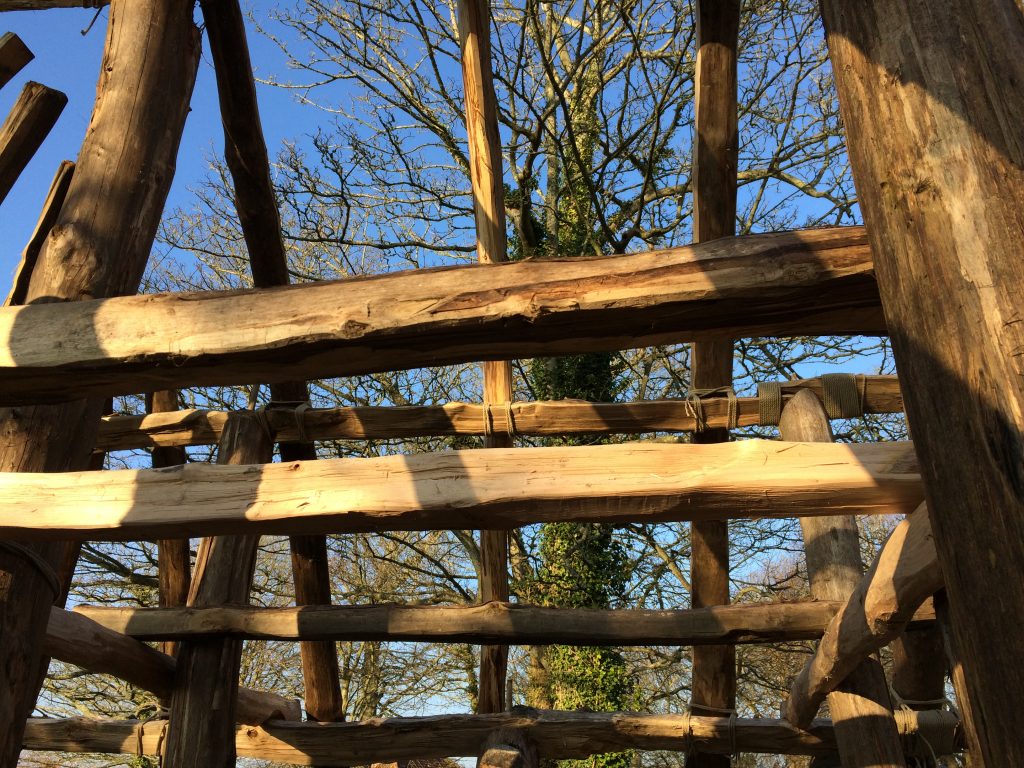 The wall Plate team are pressing on with their task.  More “V” notches into the tops of posts and fitting Wall Plate sections to them.   It is impressive to see the determinatiuon and hard work of this team.  It is a crucial part of the build and requires the largest numbers of joints (there are 19 posts in both walls) to accomplish.

Volunteers are working hard on their tasks to keep warm and the temperature is due to drop further by the weekend! 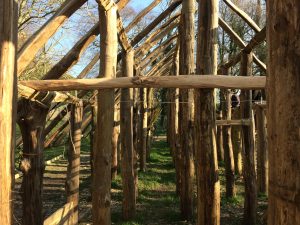 Bill, Iris, Rosie and Astra are working feverishly to finish removing the sapwood from the split oak timbers that will become tie beams in the building.  Working with an adze to remove the sapwood and leave the strong and resilient heartwood is not straightforward.  It requires a good eye and feel for the changing texture and colour change in the wood. 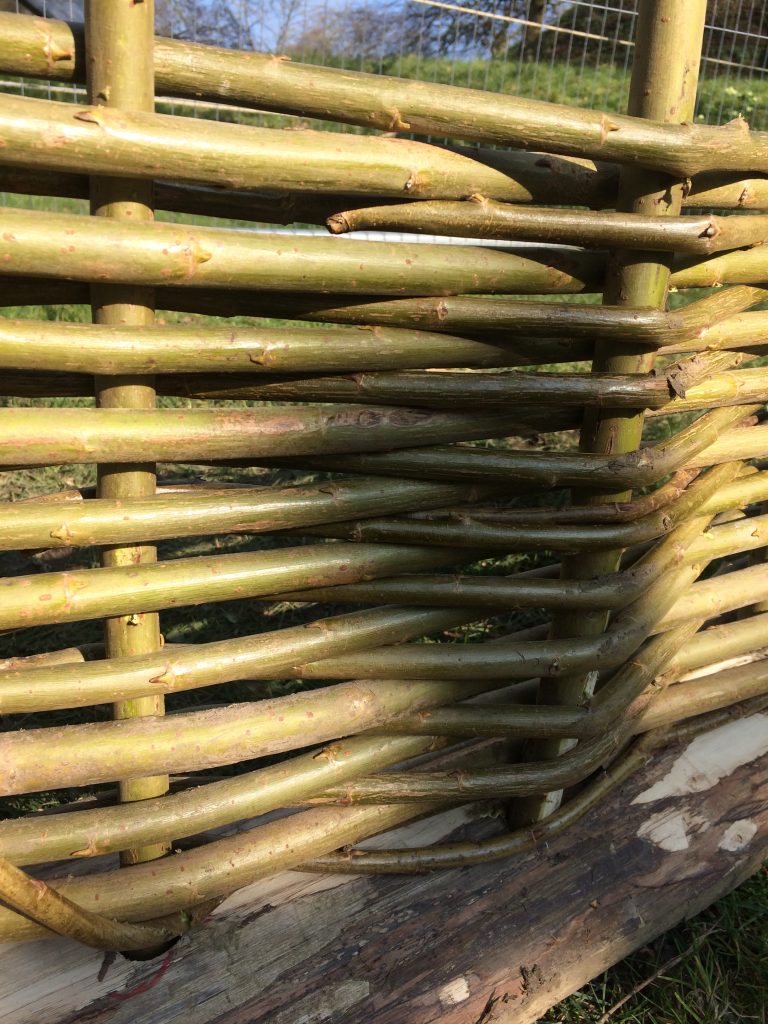 Danny and Paul are splitting more sweet Chestnut joists – this in turn will need to be processed further to remove sharp corners, and eventually be shaped to slot into the tie beams.

Again we face the issue of aesthetics.  The joists will eventually be visible from beneath as visitors enter the livestock end of the building.  To what degree should we finish these timbers? 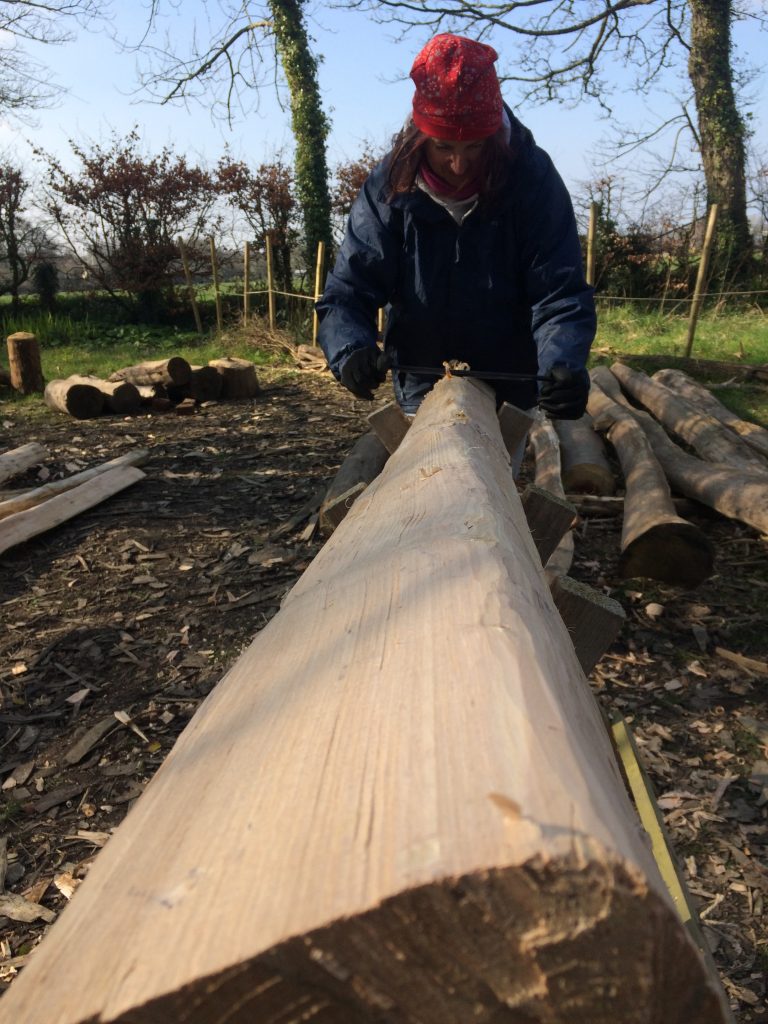 Derek is ploughing on with the “V” notches to house the next Wall Plate length. 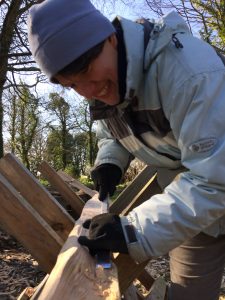 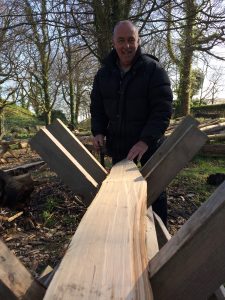 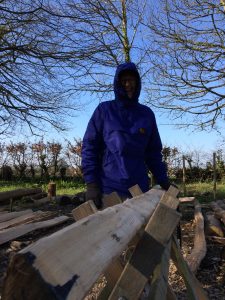 The first two tie beams have been lifted into place and marked for final adjustments.  The oak stands out against the weathered chestnut beautifully. Each timber now needs notches cutting into their ends and “scoops” to ensure a close contact with each vertical post. 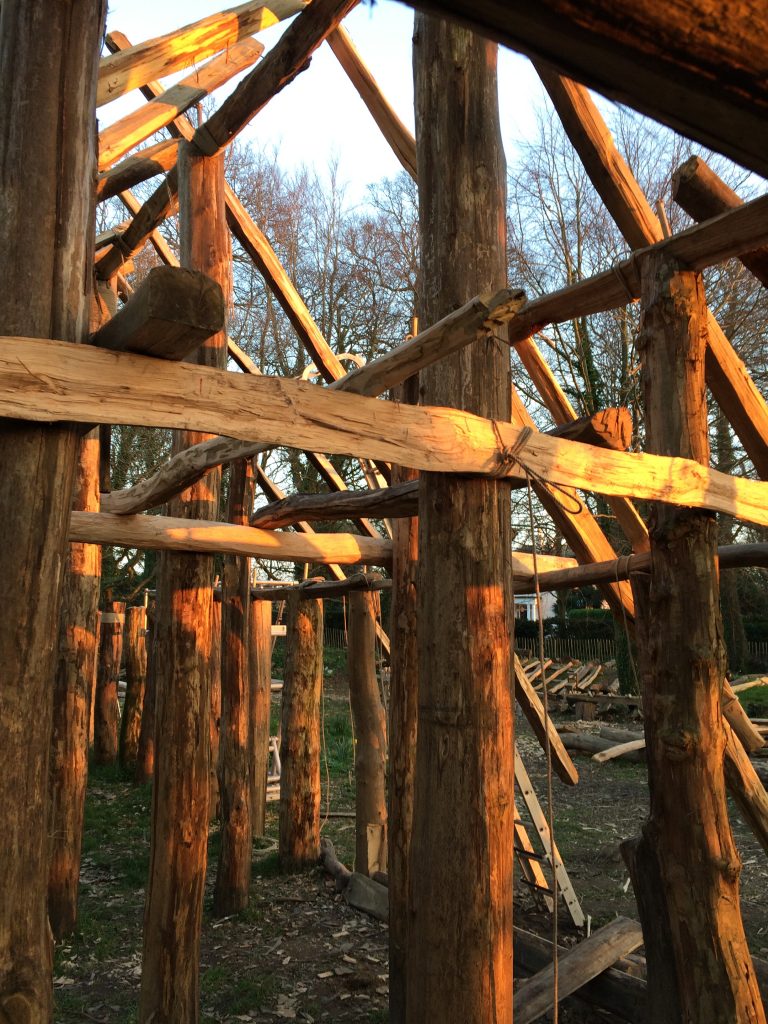 Another bright and cold day has arrived.  The last day of another work week and what a week it’s been!  Everyone has been surprised at the progression of the structure and how brilliant it looks.

Volunteer teams are focussing on the production of joists that will eventually support the mezzanine floor at the livestock end of the building.

Some of the ¼ split timbers are being successfully split again to produce more.  From the start this project has been organic in its approach – with ideas changing or modifying according to available materials and interpretations.  We are now considering that the joists for the mezzanine floor will be presented in two ways.  Half of the floor will be finished to a high standard and half will be left as functionally split timbers.  At the very least this will provide visitors with a visual difference that they can base their own opinions of how it would have been. 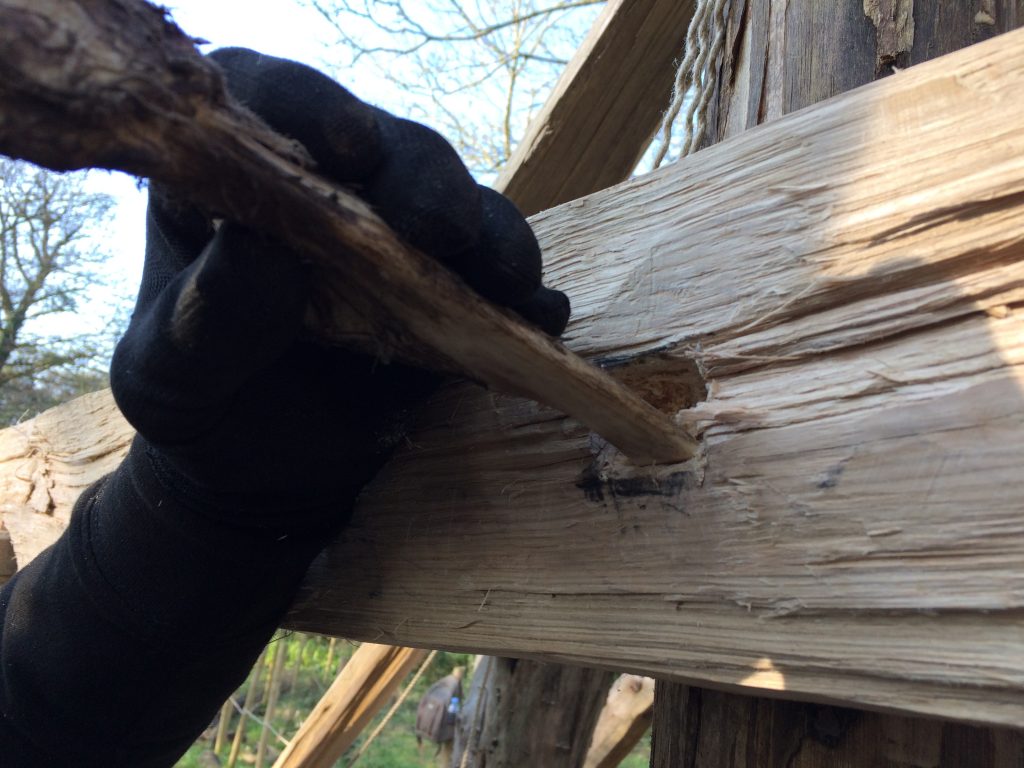 Derek has begun the process of cutting a mortise with a bone chisel into one of the tie-beam.  Again, we are testing the theory and evidence provided by square mortises in Neolithic timbers from Germany. 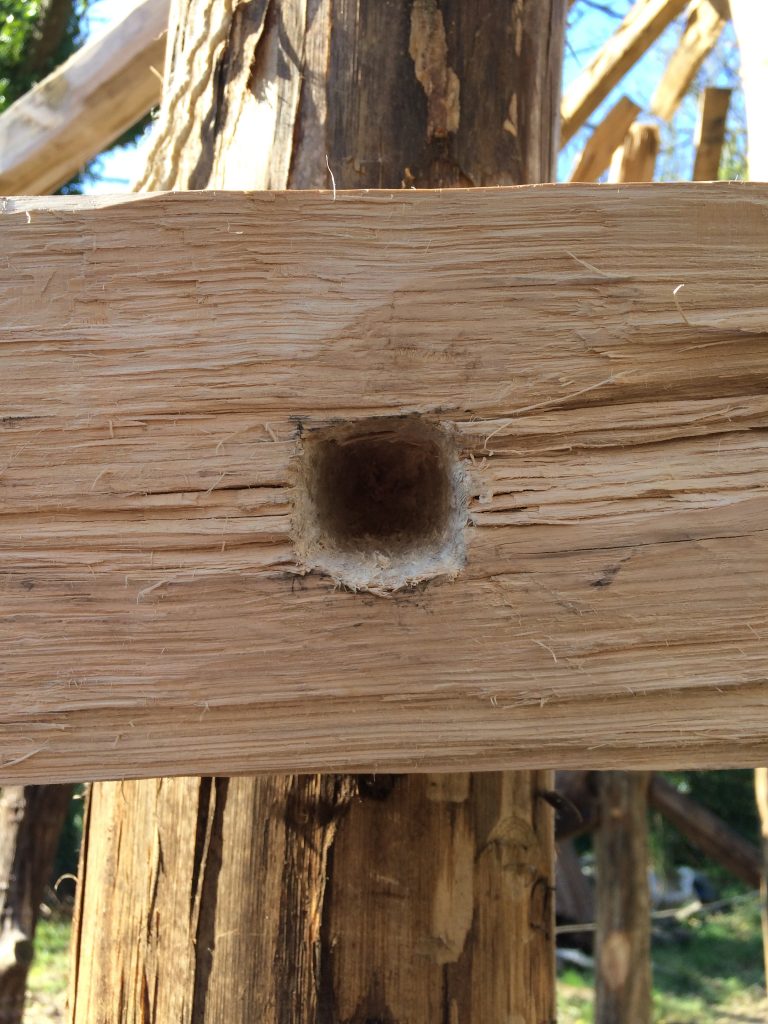 Derek is discovering that the edges of bone chisels degrade after only half and hour of use in green oak.  The re-sharpening process is reasonably quick – involving grinding with sand on a flat stone surface.  Nevertheless, it is raising the obvious question of “support” for carpenters on large projects. 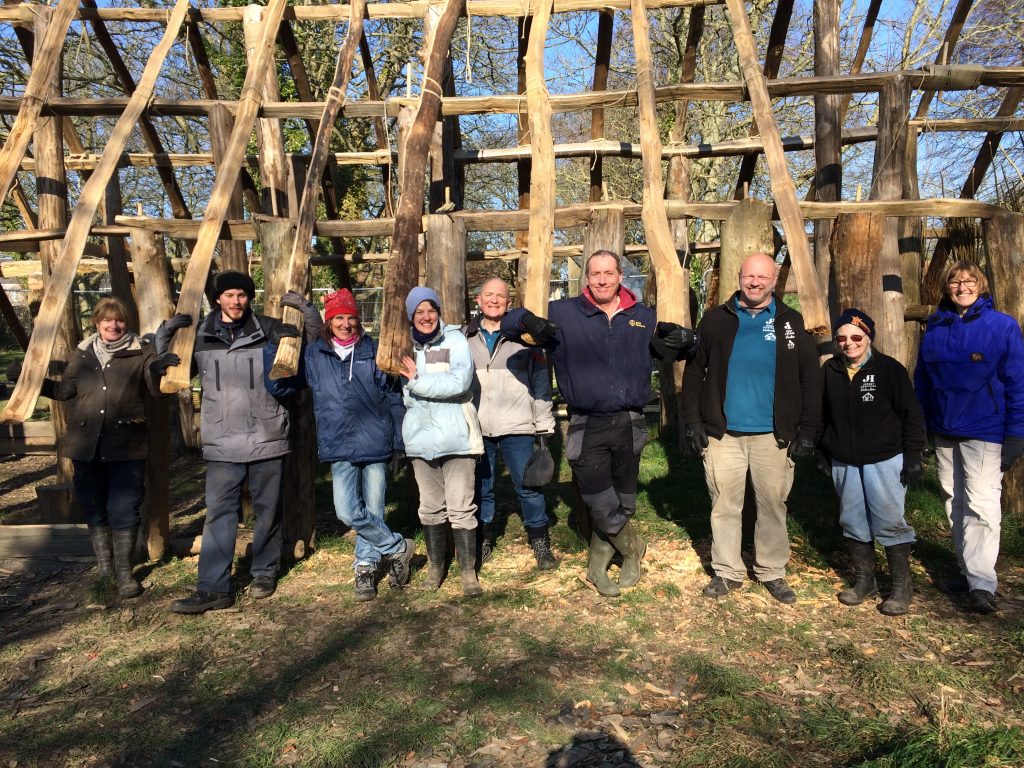 Once again the volunteers have pushed through the cold weather and really pushed the building on visually.  It is interesting to note that we are now beyond the construction stage shown in the model.  All of us have looked at it over the last year and wondered how long it would take to reach that point.  We have surpassed it and we are rapidly heading towards the next epic phase of construction – the roof  and thatching.