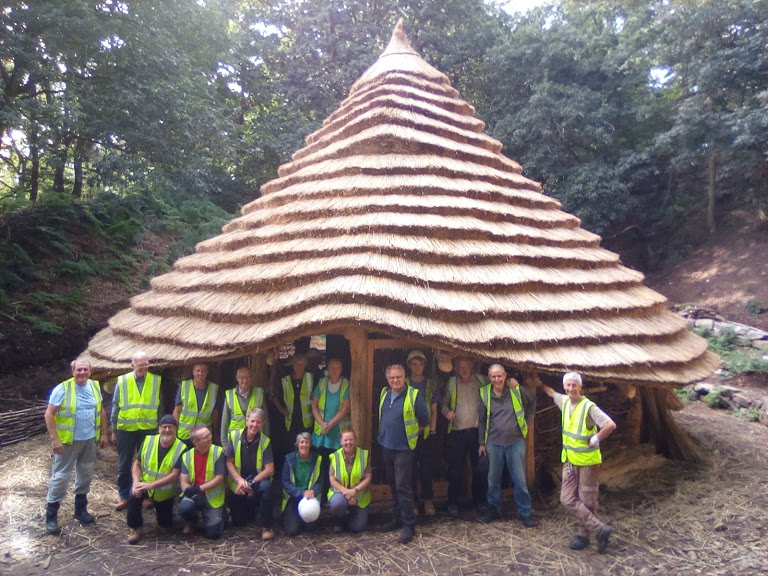 The penultimate project week has begun!  After a long summer break, the volunteers gathered at the Hub once more in the pouring rain to plan the final push on the building.

The finishing touches always take time – and the volunteers are determined to show off their skills in the things that will fit out the building and furnish it. 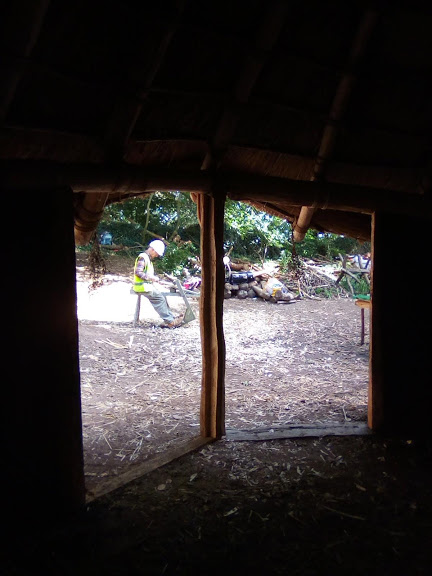 During the summer break, volunteers have been working on various tasks to help the building move forward.  Edwin and Mike worked hard on the first of two front doors. The result is beautiful and uses appropriate technology to close a gap with the materials we had to hand.  Long-term, there is talk of plank doors to eventually replace these, but that will be some way off and even more work! In the meantime, the first door is a fitting example of a frame door with wattle infill.

The roof has been finished this week.  The “cap” was made using a final visible ring beam to clamp the last 9 reed bundles into place.  The ring was attached to the substructure of densely packed and tied reed by stitching horizontally through the roof.  This will inevitably be the weak point of the roof, taking the brunt of the weather over time, and at some point it will have to be replaced.  As long as this is done promptly (when seen to be deteriorating), the roof should last well for many years. 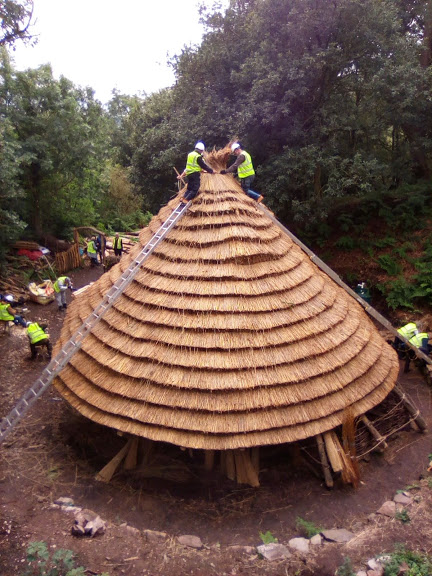 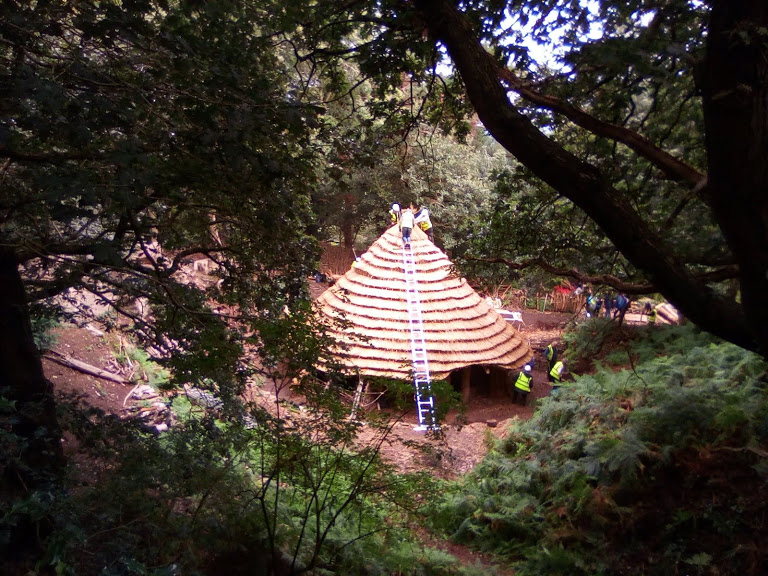 The roof has also been finally dressed – the layers patted into position using our wooden leggits, and any short pieces of reed removed from the surface.  Many weeks have gone into this stage alone – with lots of ladder work and precision required. It is a triumph for the team and experimentally, has confirmed the possibility of negotiating the triangular sub frame with thatch. 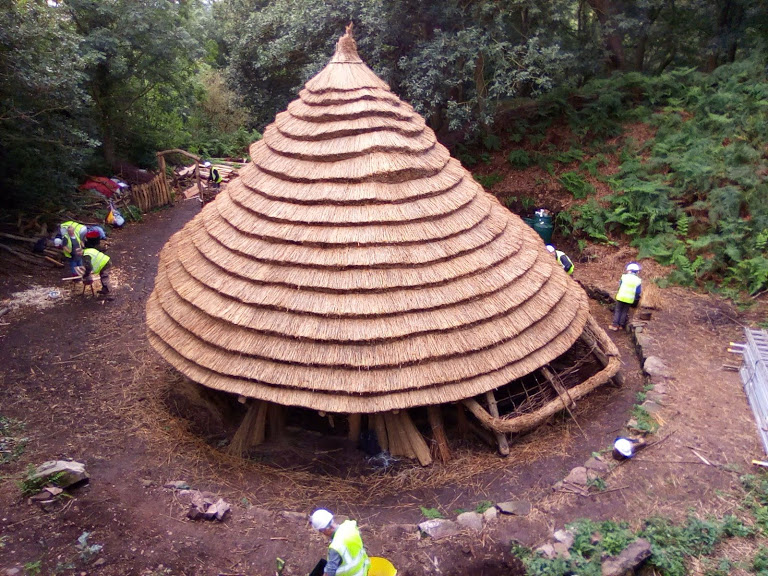 The last major task has begun in earnest.  Daubing the wattle walls is a mammoth task – time consuming and labour intensive.  Our 12 test sections of daub have had time to dry over the summer, and the results have been generally very good. 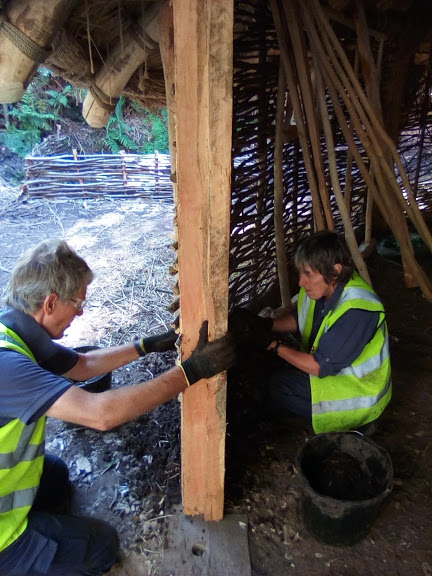 Some shrinkage can be seen on all tests, but none of it is serious. The section with least shrinkage was test 5, and happily used only materials that were immediately available on site – including the use of crushed waste reed from the roof. 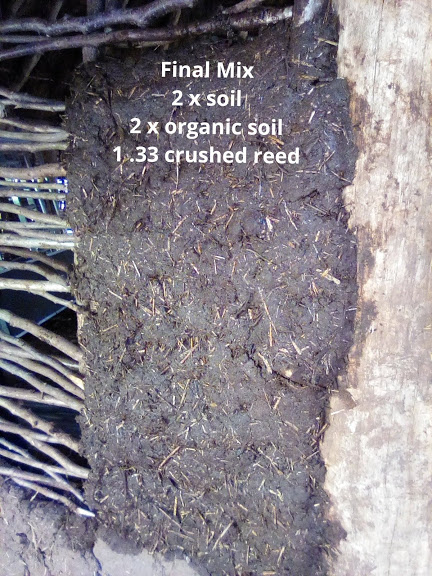 The final ratios for each mix are 1 ½ soil, ½ Organic, ⅔ reed. The resulting mix requires pressing into the wattle – and too much water makes it unworkable – but when dry, a good mix forms a solid weather barrier. 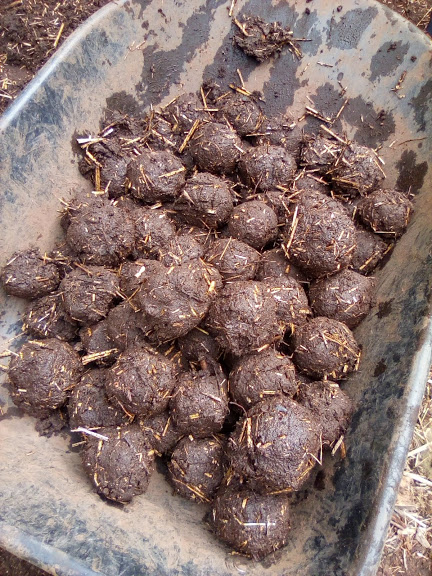 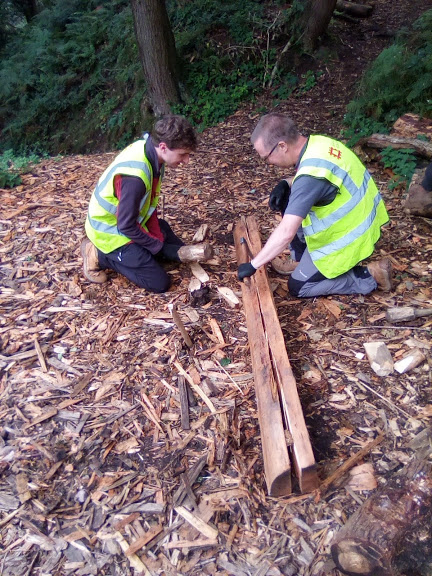 This week has seen the very difficult subject of furniture rearing its ugly head again! We have so little appropriate evidence (timber furniture from western Europe) that we simply have to look further afield for ideas – or risk the under representation of material artefacts in a building of this period.  I am convinced that our lack of evidence for furniture in buildings of this period (from Western Europe) is simply an issue of preservation of organic materials rather than a cultural feature of Bronze Age societies The stone built furniture at Skara Brae in Orkney shows clearly the spatial set-up of smaller dwellings, with hearths and storage units (termed as “dressers”) and kerbs of flat stones of varying heights and dimensions (termed as “bed boxes”).  This is fantastic evidence that confirms the presence of well furnished and organised houses.  I have an issue with this evidence in regards to our building simply due to the fact that it was produced from immediately available flat stones that would have required very little effort to move and place to create furniture. 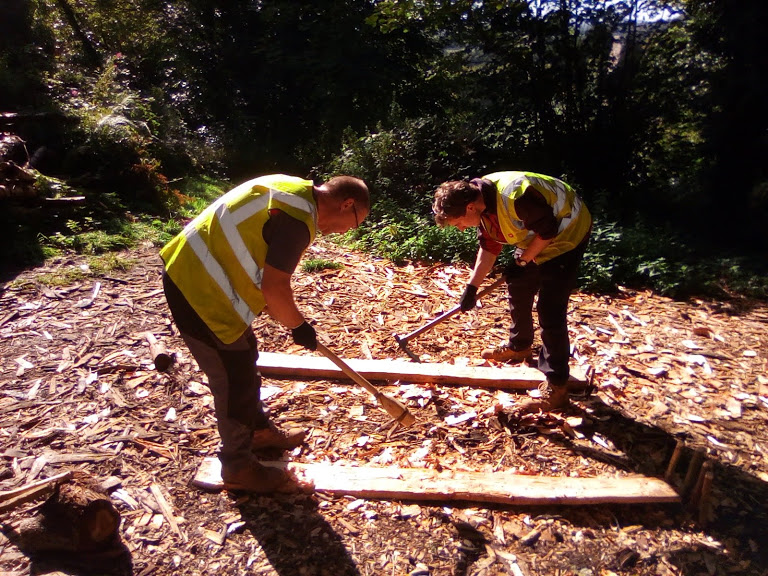 The splitting, hewing and jointing of timber requires far more input from ancient cultures than the stone furniture from Orkney and we have very little evidence for it!  Desperation for evidence drives us further afield to look at surviving early wooden furniture from Egypt and the Levant, we have the evidence for sophistication, but with it comes the issue of distance and inappropriate cultural comparisons!

Its a difficult one – with no easy answers. Our approach has always been to use appropriate techniques to interpret items of furniture we know existed elsewhere in the Bronze Age.  The crucial part of it is how we interpret it and explain it to the public.  It should never be a case of “this is how it was” but rather, “Using evidence from there, and the materials we have available, this is one interpretation of how we think it could have been.” I still feel this is a better approach than showing the public an empty building and expecting them to appreciate the Bronze Age for its sophistication. 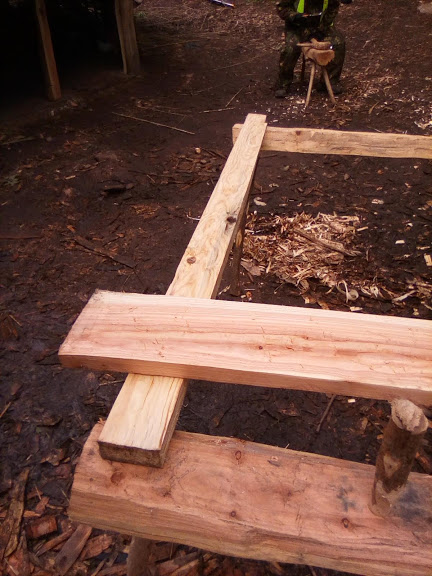 Using this broader evidential approach also brings other aspects of global development into the educational arena and helps in a wider understanding of human development.  There is something very powerful about supplying the listener with amazing evidence from elsewhere to back up a lack of evidence from here. It opens their minds to possibilities that were previously unknown but also makes illustrates the effect climate can have on the preservation of evidence. Again, the numerous fired clay models from the Bronze Age in other parts of the world give us a fascinating insight into possible furniture design and sophistication in the Bronze Age. Yes, they are made of clay, and yes we have to take into account the ability of clay to form any shape in the imagination, but these models show chairs and tables and other items of household furnishings that are rarely found (simply due to adverse conditions) in the organic remains of the sites in question.  And interestingly, they show detail of construction that goes way beyond simple functionality (no surprises there when we look at the surviving inorganic record).

We also have traces of evidence from other sources which hint at those things models or fragmentary organic remain cannot. The Iliad is full of descriptions of the finer aspects of Bronze Age life that really bring the modernity of (high status) everyday objects to the fore. 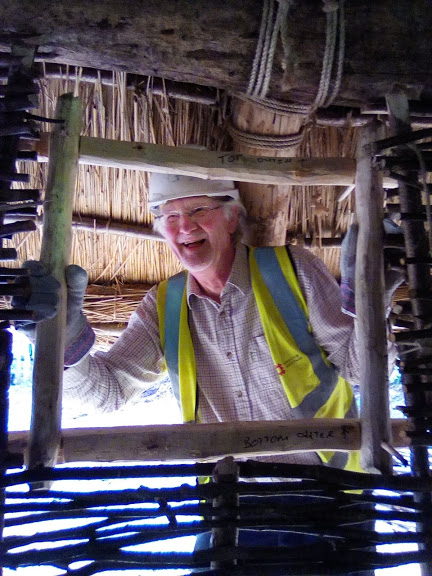 I have explored the question of windows in previous blog pages, but this week has seen the construction and installation of frames in the existing wattle walls.  Although these openings will not allow direct light into the building, they will allow indirect light to enter parts of the space which, in my experience are invaluable for everyday tasks without the need for the constant burning of fuel..  The volunteers have decided to peg square frames together on the outside and inside of each opening to clamp the existing wattle and form a sturdy housing for an eventual shutter or closure. 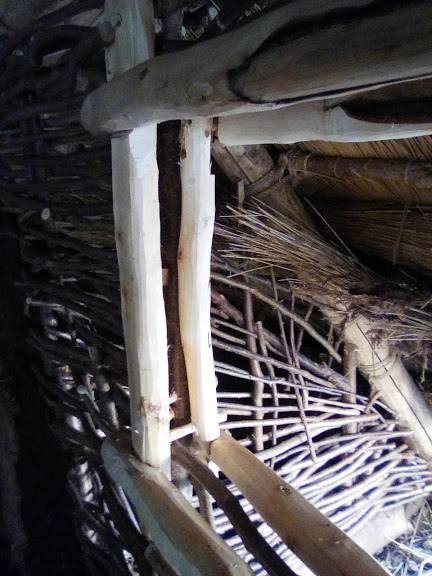 Work has also begun on the experimental annex roof.  Bracken was collected over the summer break and bundled to dry.  The resulting stems are intended to cover the annex part of the building. 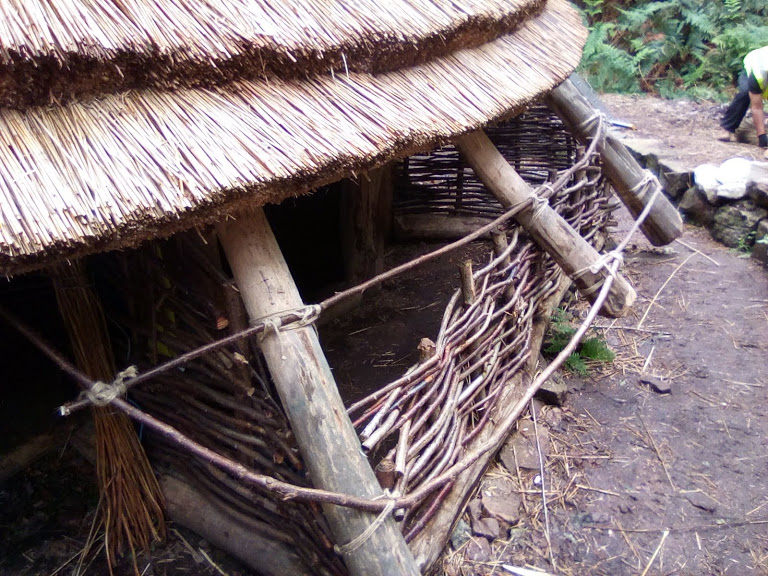 The aim of this roof section is to allow continuing experiments in local roofing materials to be made over the life of the building without requiring the removal of the main roof – or disruption to its operation. 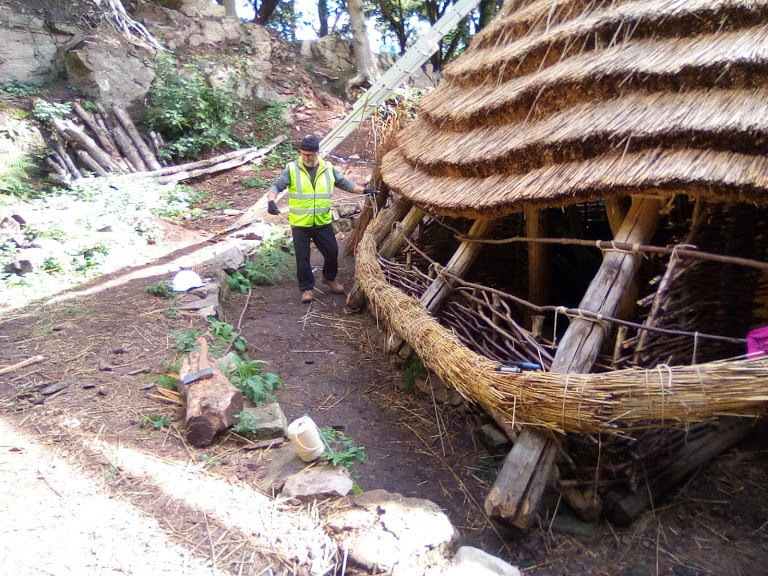 The first test is bracken stems (a very traditional thatch in some parts) which sets the first puzzle for the volunteers to solve. The first part of the mission is to prepare a frame for the thatch to rest on – and to think carefully about how it links to the existing roof without imparting weakness or leaks to the roof.

The “backdoor” is also underway, with a team of volunteers aiming to build a frame with horizontal struts (zales) that can be woven tightly with willow.  At the moment, it is envisaged that this door will not be in common use – but will provide another exit in times of need. The gap between posts at this point is also very narrow, so a door that hinges into the space would cut down the available gap excessively. 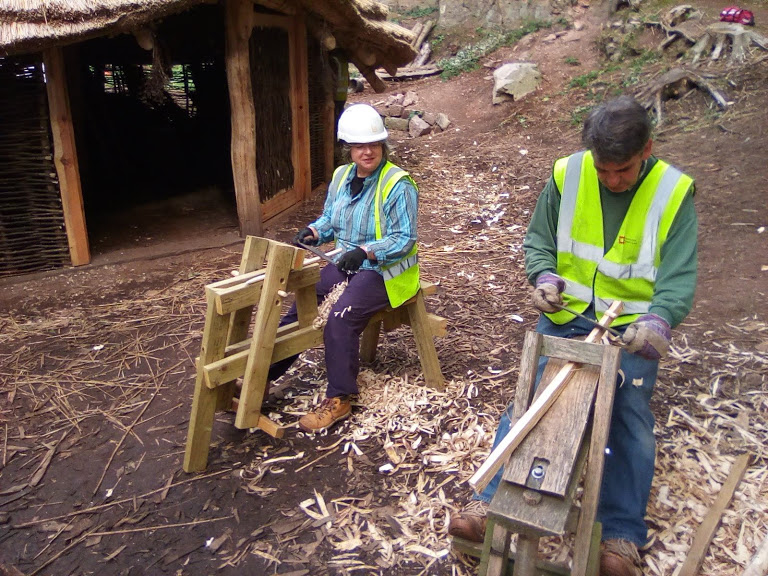 So the week ends with the final tasks well underway.  Just one week remains before the construction phase of this project finishes and the numerous tasks that will see this building transformed into a “Home” begin.